It happened not only once but several times in our evolutionary history.

By now, the idea of ​​Neanderthals as unthinking brutes has been completely disproved – they were every bit as smart, resourceful, and compassionate as humans. In fact, they were not only with humans but they also interbred with them – several times.

Already, a few studies have shown that around 2% of non-African human DNA is Neanderthal (with significant geographical variations), with several different analyses finding similar figures. Now, a new study adds even more weight to the idea of ​​a mixed lineage, but also gives it a new twist.

The study was essentially a large-scale genetic analysis of contemporary Europeans and Asians. As with previous studies, about 2% of their genomes include a Neanderthal component, but the figure was 12-20% higher in East Asian individuals, compared to Europeans. This variation can serve as a sort of breadcrumb trail, showing how human migration and interbreeding took place.

A comparison of Neanderthal and Modern human skulls from the Cleveland Museum of Natural History.

When humans moved out of Africa, they encountered Neanderthals along the way, particularly in western Eurasia. These meetings led to interbreedings, which left a distinct genetic signature.

"Although modern humans are currently found across the globe, less than 100,000 years ago they were mostly confined to Africa," Fabrizio Mafessoni wrote in an accompanying review. "At that time their hominin cousins, Neanderthals and Denisovans, inhabited western and eastern Eurasia, respectively. When groups of anatomically modern humans started spreading out of Africa, these populations met. The traces of these encounters can now be found in the genomes of the descendants of those humans who migrated out of Africa – their genomes carry 2-6% of Neanderthal and DNA fragments. " 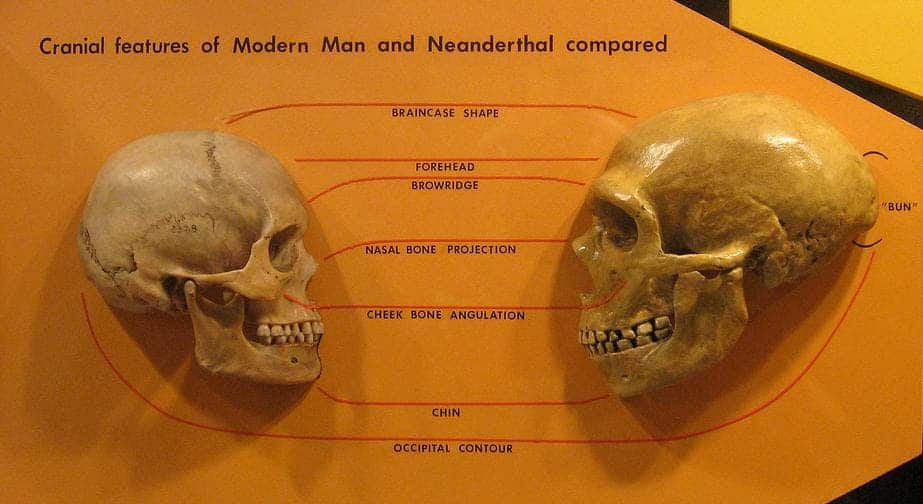 Comparison of Neanderthal and Modern human skulls from the Cleveland Museum of Natural History.

While many anthropologists believed that there was only one intermixture episode, this new study strongly suggests otherwise. Fernando Villanea and Joshua Schraiber, the study's authors, simulated the injection of Neanderthal DNA into the genomes of humans anatomically modern, and then used a machine-learning algorithm to explore this model. They conclude that the genetic distribution they saw is best explained by multiple episodes of interbreeding between Neanderthal and both East Asian and European populations.

While this likely will not settle the debate, it adds to the idea of ​​a complex, site-specific history of interactions between humans and Neanderthals.

"Although initial indications of a simple history of admixture between humans and Neanderthals, more detailed analyzes suggest that there might be additional, population-specific episodes of admixture," the study concludes.