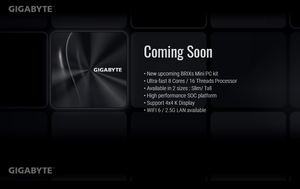 Gigabyte unveiled a new Brix Pro Mini-PC based on Intel Tiger Lake and Thunderbolt 4 in September. Now the company has released a teaser that suggests another Brix model with an AMD Ryzen processor. In the technical data, 8 cores and 16 wires are mentioned, which may be indicative of Ryzen Renoir. It can’t be at least another Tiger Lake processor, as they are still equipped with up to four cores.

The teaser gives no indication as to which processor models will be available. However, other technical specifications include support for Wi-Fi 6 (802.11ax) and 2.5 Gbit / s Ethernet. However, compared to the Intel model, the Thunderbolt 4 is not expected. Support for four different 4K monitors has also been highlighted.

In addition, the case should be offered in different form factors, such as “Slim” and “Tall”. However, it is not clear from the information so far to what extent the two variants differ. However, it seems obvious that the larger model will take up more space with more memory or small PCIe expansion cards. It is not yet known about prices and the availability of Brix models with AMD Ryzen.