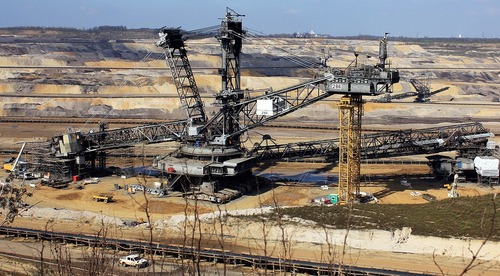 Berlin – Greenpeace Energy 2020 plans to gradually plan the lignite mines and power plants of the Rhein Group's Rhein Group and remove it from 2025 onwards. From now on, wind power and photovoltaic systems will have a capacity of 8.2 gigawatt in the open mining areas.

Greenpeace Energy will set this expansion within the concept of citizen energy, citizens can participate privately or indirectly by energy companies. Municipal corporations and private companies can also participate financially. Regional solutions are given priority. "What do we propose Rheinische Revier is a great opportunity and it brings us a great step towards climate protection," says Sönke Tangermann, CEO of Greenpeace Energy. "Our concept is an economic side of all parties and designed to prevent redundancy."

An agreement with RWE and national commitment to success is a success, Tangermann emphasizes. The Greenpeace Energy Group and other local parties have offered talks to talk about the federal government to implement the plan.

In particular, Greenpeace Energy had Hambach open mine and six of the oldest and smallest centralized facilities in 2020, the Inden mines in 2022 and six more electric installations, 2025 Garzweiler and the last three units. "The price of around 384 million euros," said Fabian Huneke, Institute of Energy Institute Brainpool, who estimated the cost effectiveness of the project: the gains from the electricity market in the electricity market are achieved, the increase in CO2 prices will not be profitable.

The following companies are launching new companies: The Cooperative Operator implements the Citizen Energy Concept, with wind and photovoltaic power, 3.8 and 4.4 gigawat output, respectively. Green electrical energy will generate more than 15 terawatt hours of electricity in 2030 – about a quarter of Rhenish lignite supplies today. However, the generation of lignite electricity will be continuing, and at the beginning of the 2030s it would drop below the level of urban energy plans. According to Greenpeace Energy, the renewable energy park would cost around seven million euros. Europe would be one of the largest renewable energy projects, and economically, especially in order to build it. "Therefore, we reject a payment from EEG, and we expect revenues from five to seven percent based on the average market values," says Sönke Tangermann. "But, above all, we can give much more renewable electricity and more climate protection, otherwise, according to EEG."

Solar and wind farms are rented from cooperative operators in a new land organized by all landlords. Lease income is at the final stage of development of 45 million euros annually. In addition, the division of land is responsible for innovation and hires all employees through the RWE lignite division work company. These, for example, work on the reorganization of the open surface and the abolition of electrical power plants. Others are adapted to new jobs in renewable energy and other industries. For his work, the employment agency obtains from fundamental structural public funds, on a proposal by the coal commission, to finance the structural change of lignite mining regions. To what extent RWE should also participate in financing measures, separately negotiating the status and group.

"Apart from being a profound involvement of regional actors in the field of citizen energy, the concept meets core criteria for Rheinische Revier's added value and workforce," says Prof. Dr. Med. Bernd Hirschl, of the Institute of Ecological Economic Research (IÖW), is the main authority on socioeconomic issues. "The project can act as an initial spark for this traditional energy region in a model of energy transformation".