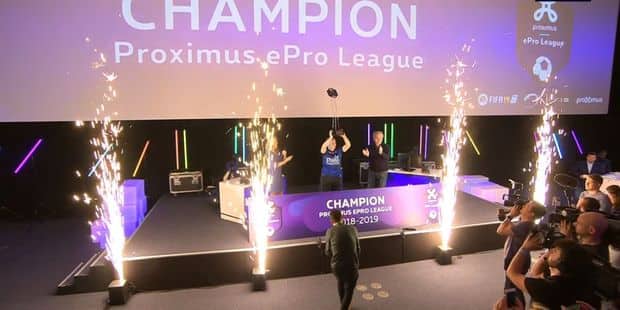 
This competition was held in two phases and on Saturday afternoon it was held at the Proximus Lounge. The semi-finals and the demanding frames for the final championship began twelve months ago. In the first phase, amateur players represented a club of their hearts in a championship based on the real Belgian football championship. When the first game is over, it's the best for the rounds. There, some clubs joined professional players hired. Four out of the players left for the last place: Bentato "Emperatoor" Zakaria (RSC Anderlecht), Geoffrey "Blake-Revenge" Meghoe (Club Brugge), Quentin "ShadooW" Vande Wattyne (RE Mouscron) and the only player. amateur still on the race, Miran "Mirancoolo" Salim (Club Brugge).

In the first semester, the first two cities controlled the public with two specific games. The difference between the players was so small and they went back (2-2 at the end of the home and away). So, it was a golden purpose to decide everything. In this exercise, Emperatoor had the strongest power and was the strongest and qualified for the final (3-2).

In the second final, ShadooW Mirancoolo, who was a wonderful but wonderful player for the first time, finished last season. Again, both men had a tough fight. After the first part of the first half, when it started playing on the mouscronnois field, the players split a new match (2-2) after the match, after ShadooW punched the penalty. The rule that was active for the final games was ShaduoW qualified against Mirancoolo's misunderstanding. It seems that the goal goals have not doubled.

There are two friends in the final game, after closing the game, a final (in the current game) is played in detail and ShadooW has departed. After the first goal of the defense of Emperatoor's defense, Hurre scored a perfect match and three times more than a series of superb sharp attacks over speeding. Mouscronnois won 0-4 and won the first Proximus ePro League.

He is very pleased that Quentin Vande Wattyne has promised to return to the next year to defend his title.