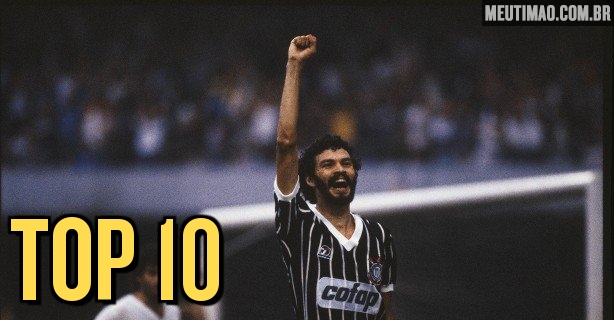 Since 1965, August 22nd is Folklore Day. Inspired by that, I resolved to list here the ten greatest legends of the Corinthians shirt.

Author of the goals for the final of the first Corinthians Liberators, I would never forgive myself if I didn't put Márcio Passos on this list.

With consistent performances between 2011 and 2012, the striker has made his name in the history and in the coronation of the Faithful. It was never a crack, but it was dedicated and clever. He honored the mantle and performed, next to a very united cast, the dream of over 30 million madmen.

He came to the Corinthians with the hard mission of replacing Rivelino and fulfilled his role very well.

This guy was the author of one of the most memorable goals in the history of Timon and considered by many to be the most important in Corinthian history. At the end of 77, Paulista's hair – who gave the jejum of expression titles – Basílio sent to the bottom of the nets the ball that made many faithful weeping.

It could not be excluded from these ten legends, not by technical reason, but by the historical importance of its fact, which will always be remembered as twisted.

I wouldn't call it brother exactly as an idol, but for its quality, I could not help but be quoted here.

The Argentine arrived in 2005, in the MSI era and always gave a show in the field. Stubborn, stubborn and very technical, then fell into the graces of the Faithful. Coming from the favelas of Argentina, it was the ultimate example of the phrase 'Corinthian, maloccero and sufferer'.

'Espaaaaaaaaaaaaaalma, Ronaldo' was practically a mantra for who lived that time.

He was the third goalkeeper, had his chance and never left the post. Polemic, stubborn, leader and very skillful under the rafters, he is considered by many twists to be the greatest goalscorer ever to wear the Timon shirt.

José Ferreira Neto, once a sports commentator and presenter, was certainly one of the great ones who had already worn the Corinthian robe.

Exempt collector of faults and one of the main names – if not the main one – in the conquest of the first title of the Brazilian championship, in 1990, then became the Xodó da Fiel. Giant!

Other than masterfully failing, Marcelinho was, for thousands of kinks, the greatest Corinthians to ever pass. The player was part of a legendary cast at a time when football was a real spectacle.

Four paulistas, two Brazilians, one Brazil Cup and one FIFA Club World Cup. Trophies are not missing for the eternal Foot of Anjo.

Smart, cultured, politicized, leader and ball-bomber. That was Socrates, mentor of the Corinthian Democracy, a movement that stood out not only in Brazil, as in the world.

An example of a real human being, because of his shortcomings, but in the Timon he left nothing to be desired. He died on the day that the Corinthians were champions, as he wished.

I did not have the privilege of seeing him play, but to hear from my father – palm fanatic – that the player was extraordinary. I could see, years later, with the advent of the Internet, that they did not exaggerate.

The Reizinho is on my list not the hair he has conquered, but by the way he came out. It was used as a scapegoat in the defeat for Palmeiras, in 1974 and left the paulista time. Hoje, recognized by the Faithful, is a great idol and has a bust in his homage.

'It's not technical, Ana Paula'. Ok sim! I said we were wearing the shirt and not just playing. Here, not mine role of Corinthians legends, Tite tem special space.

Arrived in 2004, however, due to internal misunderstandings, he left the club the following year. We could never assume that he would return to the Corinthians with no more opportunities to win whatever he could around here. In the three passages he was Brazilian champion twice, of the Liberators, World Cup, Recopa and two Paulista Championships … ufa!

Here in the Timon, it was an example of ethics, responsibility and professionalism.

The year was 2008 and I almost fell off the couch when I heard that Ronaldo was hired by Corinthians. For me and the soccer world, having one of the best players in the world back in Brazil seemed like a utopia.

The Phenomenon has shown here, but once again, to be an example of overcoming, clutter and grinding technique. The greatest and best player I've ever seen Timão's hair.

A lot of people were off the list, I would love to be able to pour on so many other athletes that made me vibrate or that in some way helped to enlarge the history of the Corinthians. The elites here, for the most part, have no relation to idolatry and are of historical importance. You can disagree, find someone unjust and tudo bem. Conceived as esse, which made me elaborate the text, are very subjective. But the fact is that you will talk or talk about them any day for your children, friends, grandchildren or even rivals.

But what about the legends you saw here in Corinthians?

Look at me:
mourning the Corinthians.