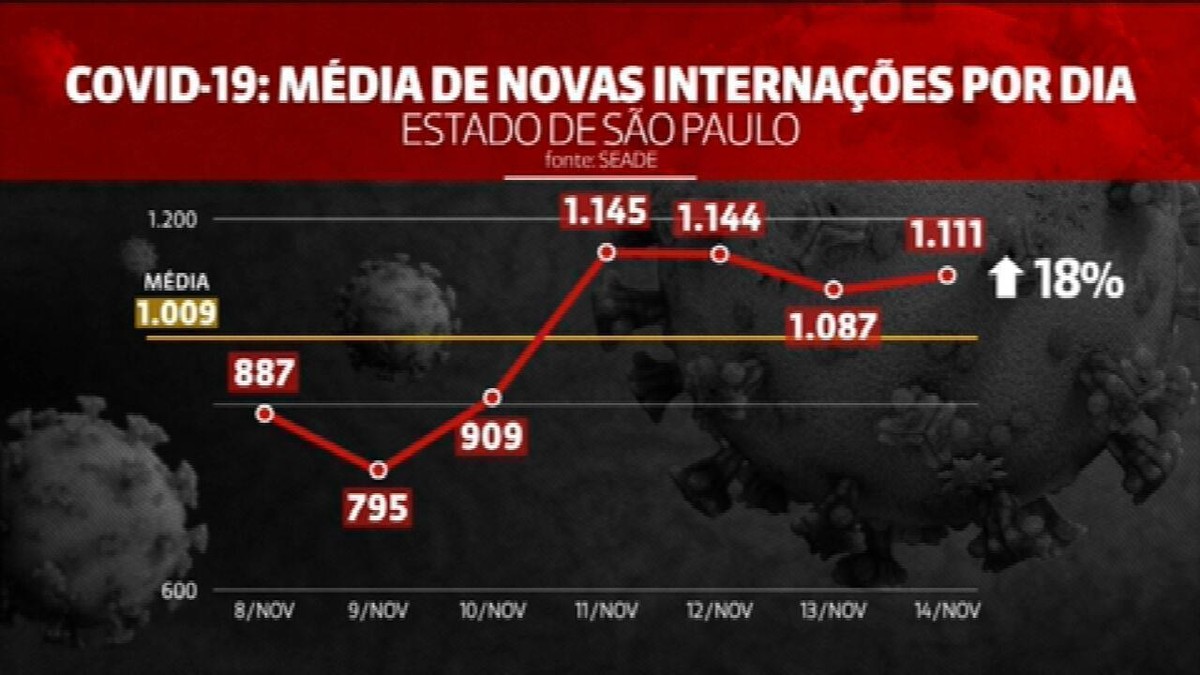 The government of São Paulo extended the quarantine in the state until December 16. The measure was announced at a press conference on Monday (16) and was published in the Official Gazette this Tuesday (17).

Despite progress in flexibility, the quarantine has been maintained since March and has been extended by the state administration.

At a press conference this Monday, the government of São Paulo approved this hospitalizations for Covid-19 in the state are increasing.

In the last epidemiological week of November 8-14, hospitalizations for suspected and confirmed cases of the disease increased. 18% in the ratio last week: the daily average of new hospitalizations rose from 859 to 1,009.

The São Paulo Plan, which regulates the quarantine phases in different regions of the state, establishes tougher or lighter measures based on health indicators for each location. will not be updated this week.

According to the government, the change will not be made due to a bug in the Ministry of Health data that affected SP Covid-19’s death data last week. They are indicators that determine the quarantine phases in each region.

The statue arrived this Monday A total of 40,576 deaths from coronavirus and 1,169,377 confirmed cases of disease since the start of the pandemic. The number of new cases per week, which was declining, was stable in the SP state compared to the previous week.

According to state health secretary Jean Gorinchteyn, if health indicators continue to grow, more restrictive measures could be taken in quarantine.

“If we increase the rates, we will surely take stricter and more restrictive measures to continue to guarantee lives. We will do so,” says Jean.

“Lack of information on cases and deaths for 6 days last week due to breakdowns in the Ministry of Health system […] it had an impact on data normalization throughout Brazil, and especially in São Paulo. Therefore, we are postponing the update of the São Paulo Plan to November 30. It is a precautionary measure and shows our responsibility not to change the qualification of states without having all the indicators available, ”says Doria.

Last week, doctors at 14 hospitals had already warned that Covid-19 had increased its access to São Paulo’s private network. However, Secretary of State for Health Jean Gorinchteyn denied on Thursday (12) that the number was increasing.

“All hospitalizations in the state of São Paulo, whether public or private, are reported to our regulatory bodies of the Department of Health. So we work with official numbers. These official numbers are not revealed by the media,” he said at the time.

In addition to reports from the capital’s private network, official data released by the state government for the entire São Paulo Greater health system highlighted the increase in the average mobile number hospitalized in November compared to October.

The mayor of São Paulo and candidate for re-election Bruno Covas (PSDB) also denied that hospitalizations were increasing.

“What we have is specific data from some private hospitals that receive a lot of people outside of São Paulo, so that doesn’t reflect the evolution of the pandemic in the city. Aggregate data from the city of São Paulo shows the worsening of the disease. ).

In a statement, the São Paulo government said in a press conference on Thursday (12) that it was still too early to talk about the rise, as data from the global health network did not yet indicate this scenario. prior to any publication, assessing the veracity, accuracy and transparency of the information “.

The reclassification of the regions of the state of São Paulo in the plan to reopen the economy during the coronavirus pandemic was expected to take place on Monday (16), but was postponed to November 30.

According to the state leadership, the reason is the blackout of the data that caused instability in the Sivep-Influenza system of the Ministry of Health on November 5th. At the time, the São Paulo State Government went five days without updating Covid-19 data.

“Lack of information on cases and deaths in 6 days last week, caused by the breakdown of the Ministry of Health and now apparently to be resolved from that week, but the breakdown affected the normalization of data especially in Brazil and here in São Paulo. we are postponing it to November 30, ”Governor João Doria (PSDB) said.

The São Paulo Plan regulates quarantine throughout the state, classifying the regions of the state by color, specifying in which measures to reopen the economy they can advance their position. The criteria on which the classification of regions is based are:

The state currently has eleven regions in the yellow phase and six in the green phase.

VIDEOS: Everything about São Paulo and the metropolis