A family but fresh take on the franchise 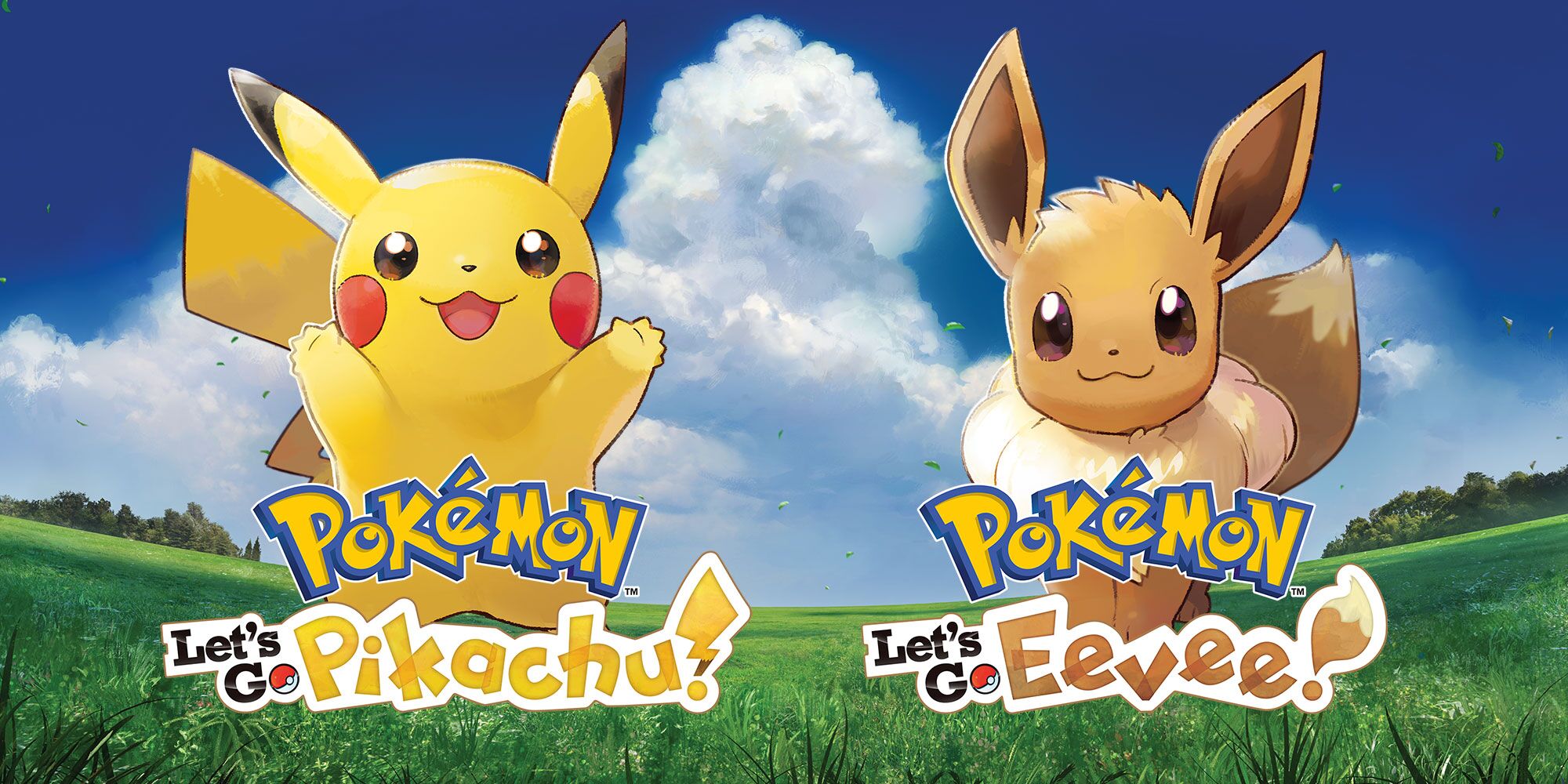 A remake of a classic Gameboy that successfully integrates the quick and approachable catch mechanics of Pokemon Go is fun for the whole family.

It's been 20 years since I begged my mother to buy me that new game that all my friends were playing and talking about, and also 20 years since I first defeated the Elite Four and my rival to become the Pokémon Champion.

With 20 years of Pokemon games under my belt, it's undeniable that Pokémon Let's Go Pikachu / Eevee was made with me in mind. It plays to my nostalgia by letting me check out locations I've just previously visited on my tiny Gameboy screen, and once again defeated the likes of the evil Team Rocket.

However, there's also no denying that this game was also made with the casual crowd in mind, too, inviting players from the Pokemon Go mobile game to experience a more long and proper adventure. While catering to too many types of gamers can usually lead to a mess of a game, somehow Nintendo pulled it off. 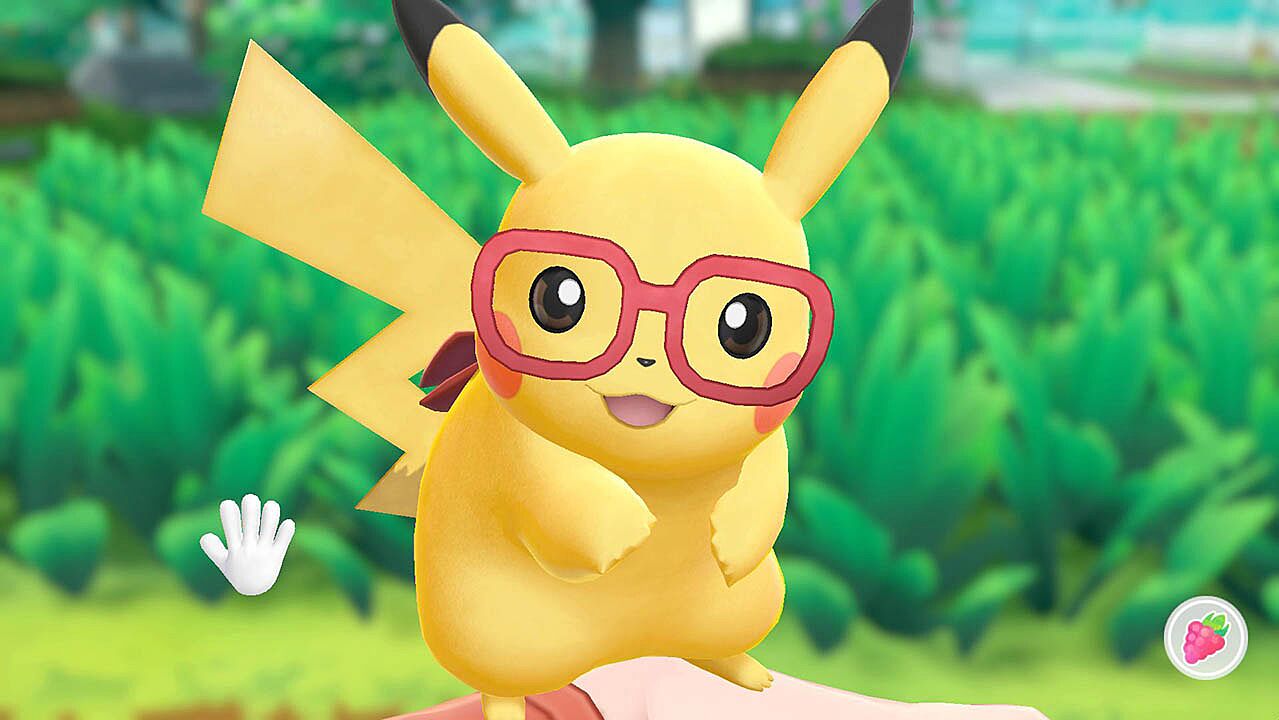 Looking at it from a nostalgic point of view, Pokémon Let's Go offers the same classic adventure that I first experienced in 1998, although this is a remake of Yellow which came out a year later. From the moment you wake up in Pallet town, you know exactly what kind of adventure lies ahead of you, and despite this, I was still very excited to experience it all over again on the Switch.

Opting to remake Pokemon Yellow He was also smart since being one of the earliest games in the franchise, it's less bloated with all of the advancements and extras that were added in the following games, making sure new players are never overwhelmed. It's an amazing gateway game to introduce new and young players to the franchise.

On the flipside, Nintendo opted to use the Pokemon Go catching mechanic found in the popular mobile game to ease players who have perhaps never played a game in the series outside of the mobile entry. The greatest change from the original game, out of finally being able to play a core Pokemon game on your big screen TV, is the catching mechanics integrated from Pokemon Go.

No longer are you battling every random random encounter, but instead, you'll be chucking your comically large supply of Poke Balls at them. While this change is easily the most controversial, at least when it comes to series purists, I found it to be just as engaging, especially given the new combo catching mechanics. 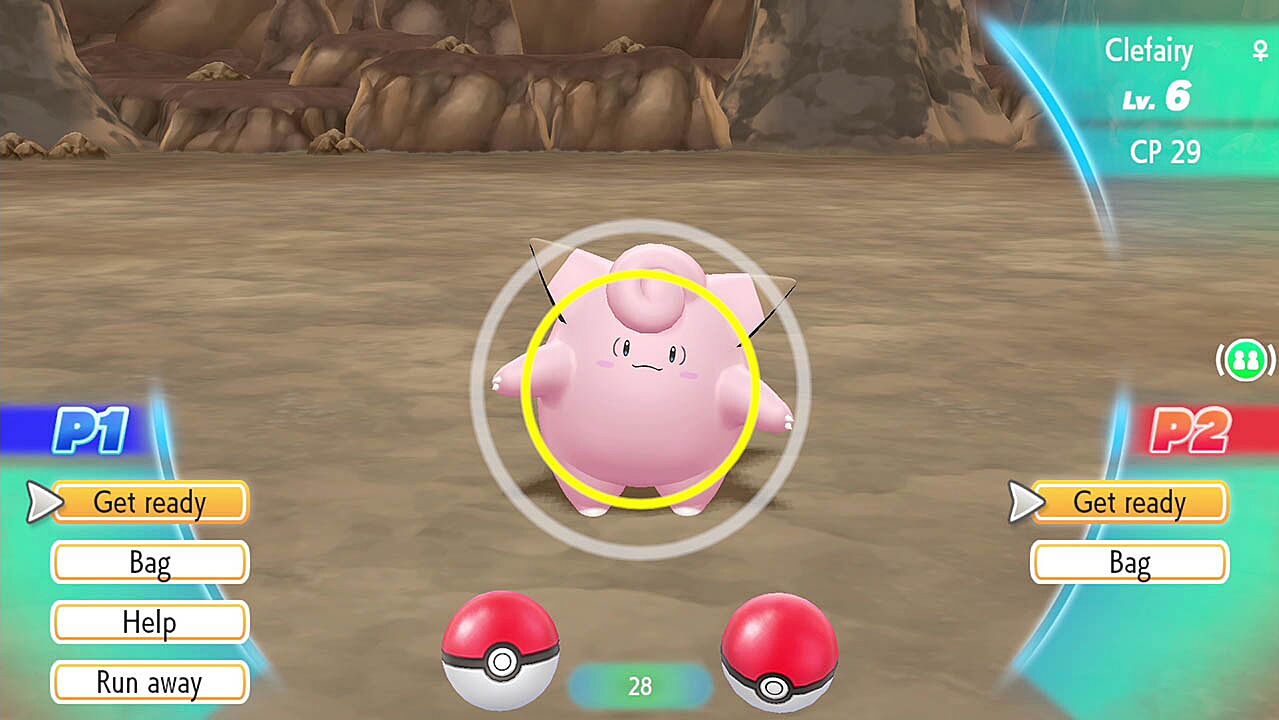 In past games, catching more than one Pokemon was usually unnecessary, especially if you were going for Pokedex completion, but like Pokemon Go, catching multiple of the same Pokemon is not only common, it's encouraged. Every same creature that you catch increases your catch combo counter, not only awarding more experience to catch but also increasing the chances of encountering those same creatures with better stats and a chance at it being a 'shiny' version.

The act of catching can be done one of two ways. If you are playing in the handheld mode, you aim your Switch by physically tilting it until the Pokemon is in the center of the screen and then press a button to throw the Poke Ball. It's certainly not the most engaging way to play, but it's also a lot easier and definitely the most accurate. If you're playing on your TV or in tabletop mode, you'll need to gesture a throw with your Joy-with.

This is easily the most fun way to play, but it's also not as accurate. There were times where my Poke Ball flew to the other side of the screen, without changing the way I gestured. This could get frustrating, but given that you will always have such a large supply of Poke Balls, it's much less punishing when you actually miss a throw or two.

Battles will be instantly familiar to any Pokemon veteran, as they feature the turn-based combat the handheld games have stuck with for 20 years. It's not the first time we've seen gorgeously modeled Gen 1 Pokemon in battle, as Pokemon X & Y You have already managed to do that, but it's wonderful to see the action unfold on your TV.

There are also some neat changes made from the Gameboy game to the current iteration. Pokémon themselves now appear in the world rather than initiating a random battle in tall grass. This makes catching them more specific, especially if you're going for a high catch combo.

The Bike Shop, while still in the game, does not allow you to buy a bicycle for faster world traversal. Instead, large Pokemon can be summoned out of their Poke Ball which can be actually mounted. Now you can zoom through Kanto on the back of a Persian, or fly on the back of a Charizard. It's a neat touch, and I love that implementation. 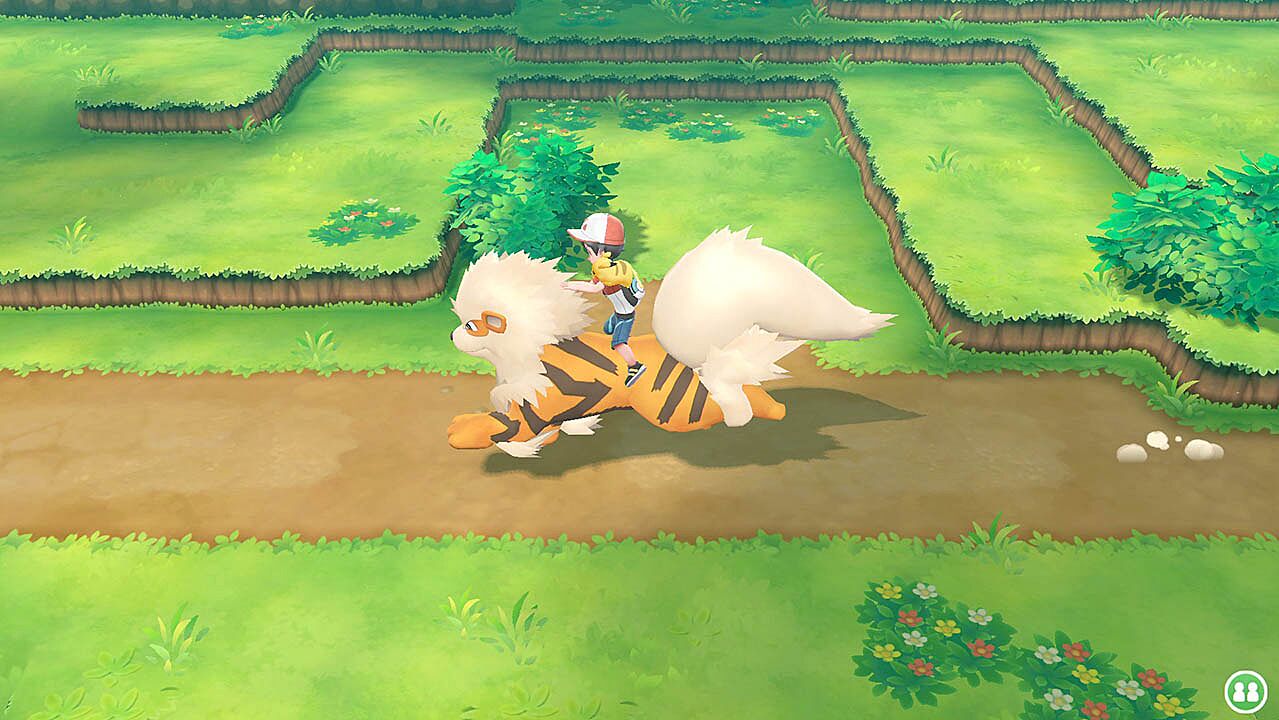 Of course, the Pokemon partner, which in this case is either Pikachu or Eevee depending on which version you buy, has a completely separate mode that allows you to interact with them and build your bond. Much like Pokemon-Amie in the recent games allows you to pet and feed your party, you can do the same with Pikachu or Eevee. While I did not spend a lot of time doing this, having my Pikachu try to get my attention to tell me how he felt about an event that just happened was certainly charming, and always deserved a pat extra for it.

There's also Pokemon Go Integration where you can transfer your monsters from the mobile game to the game console, and then be able to catch them within the Go Park. It's neat that the implementation is there, especially since Pokemon Bank does not seem to work with Let's Go. It's important to note that this is a one-way transfer and when they are moved from Go to Let's go, they will no longer be available in the mobile game.

I also have to mention the Poke Ball Plus, since it has easily been my preferred method of play. With only two buttons and a joystick, you can play the whole game with it and of course, makes the gesture of throwing a Poke Ball much more authentically fun. You can also transfer your favorite Pokemon in it and take it with you wherever you go, which will give them experience points the longer you have them in there.

A word of warning; This makes the game exponentially easier since you'll be able to level your Pokemon really fast this way. As a bonus, it also comes with Mew, which to my knowledge, is the only way to get it. At $ 50, it's quite pricey, but it's also a fantastic controller for younger players, and since it works with Pokemon Go, it's a much better peripheral than the Pokemon Go Plus bracelet which released two years ago. 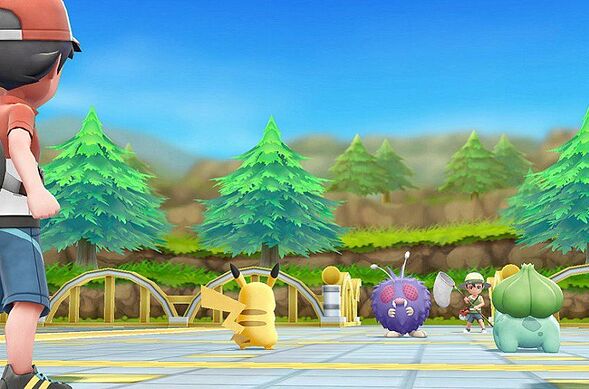 That's the perfect follows for multiplayer. The whole game can be played with another player who can drop in and drop out at almost any point in the game. Not only can they explore the world with you, but the game is still tethered to the main character, they also get to use a Pokemon in battle, making it often unfair to your opponents who most of the time only use one single creature.

More than anything, it's a perfect addition for kids. My six-year-old daughter, who is not exactly video game-savvy but adores Pokemon, was excited to have her girl avatar explore Kanto with me and help me out in battles. It's probably one of the best games to date to have such a kid-friendly implementation, and it made me extremely happy to experience most of the game with her.

My last praise goes to the soundtrack. Sure, the game looks good, at least for a remake of Pokemon Yellow, but the soundtrack itself is absolutely magnificent, with orchestrated versions of all my favorite songs from the original. Sure, this was not the first time I heard an orchestrated version of the Pokemon Trainer Battle theme or Cerulean Town theme, but these were my favorite iterations of them by far.

Even though I have mostly good things to say about Pokémon Let's Go and how it was revitalized and refreshed to classic Gameboy, there were a few shortcomings. I'm not sure why, but I expected there to be some voice acting. Maybe not for every single random trainer you meet, but coming across Jessie and James for example and not actually hearing their voices when they announced themselves were a letdown. Maybe that's coming in next year's current Pokemon game core, but it was disappointing not to have it a feature in Let's go 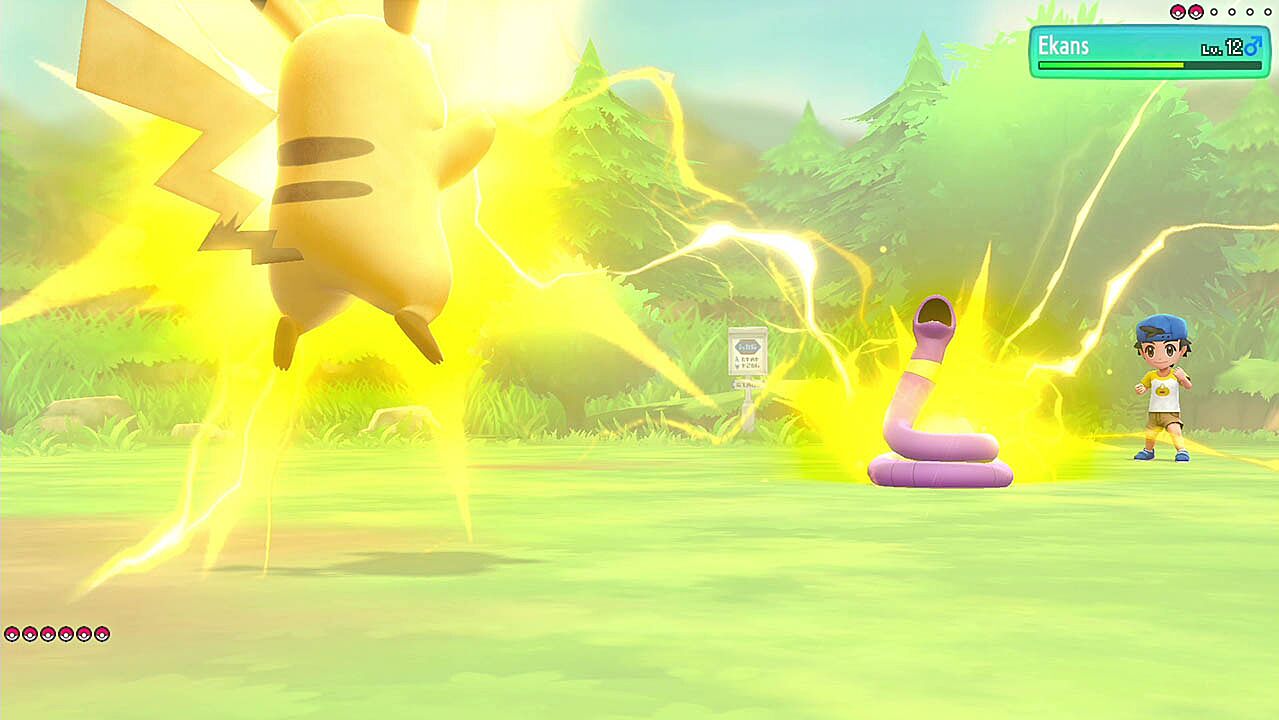 Secondly, there are a few quality of life shortcuts missing. For example, if I want to quickly heal my Pokemon while exploring, I can not simply go to my Pokemon and press a button which would take me to my available potions. Instead, I have to open my bag, open my medicine pouch, then select the medicine, then select the Pokemon to use it in a different menu and lastly confirm it. It's such a needlessly long process when it could have been easily streamlined.

The same goes for the UI while catching Pokémon. If I want to throw Berry to make the catching process easier, I have to open the bag, scroll to the berries, select it and then instead of automatically throwing it, then I have to press another button on the catch screen to throw it . Being able to scroll through available Poke Balls or Berries would, again, just make this whole process so much more streamlined.

Pokémon Let's Go is one part nostalgia trip, and other part re-imagined classic. It's familiar enough for those who have previously adventured through Kanto but contains some new additions to keep them busy and engaged even after the main adventure ends. It probably will not do much to convince those who are against the Pokemon Go Catching mechanic, but its inclusion streamlines the experience and makes for an overall inviting entry for new and younger players.

Best of all, if you grew up on the franchise and now have kids of your own, this is a fantastic title that you can experience with them from start to finish.

Pokémon Let's Go is one part nostalgia trip, and other part re-imagined classic. It's familiar enough for those who have previously adventured through Kanto but contains some new additions to keep them busy and engaged even after the main adventure ends.

A copy of this game was provided to App Trigger for the purpose of this review. All scores are ranked out of 10, with .5 increments. Click here to learn more about our Review Policy.