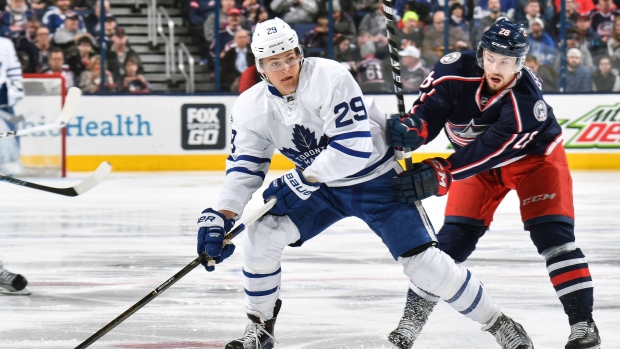 With less than a week remaining before the deadline for him to sign an NHL contract, Toronto Maple Leafs restricted free agent William Nylander is skating with the junior team of Swedish AIK club.

The 22-year-old, who has until Saturday at 5 p.m. ET to sign a contract or sit out the remainder of this season, was on the ice Monday with the under-20 club.

AIK Sports Director Anders Gozzi told Sweden's TV4 that Nylander spent time with the team over the past month.

"Yes, in the autumn, he has been training with our J20 team in the afternoons and evenings," Gozzi said for Aftonbladet, via Google translate.

Gozzi added having Nylander, a veteran of 185 NHL games, has been beneficial for the junior club.

"… It's fun for the guys to see what level an NHL player is on, to fight him and to compete with him on training. It's incredibly fun and educational for them," Gozzi said.

Nylander missed his 24th game of the season on Monday night as the Maple Leafs improved to 17-8 this season without the winger in the lineup.

Leafs head coach Mike Babcock said on Saturday that it was his "assumption" that the team would get Nylander back this week.

TSN Hockey Insider Bob McKenzie reported last week that a long-term deal between the two sides has not been ruled out.

"Now that we're close (r) to the end of the process, I really wonder how much more negotiating will actually take place," McKenzie wrote on Twitter. "I get the feeling the Nylander field has let TOR know in no uncertain terms where they stand and I'd bet vice versa is true as well …

"Conventional wisdom is that the logjam will be broken by a bridge deal and common sense that suggests that's the way to go. Two years if you're Nylander; three years if you're the Leafs. But I certainly do not think the longer-term (six years) is out of the question at this point.

"If this deal gets done, I could see it being a three-year deal that pays out $ 5 million or slightly more than per year over the term. If it's a deal for six years, I could see it being high 6's, like (Boston Bruins forward David) Pastrnak, maybe $ 7 (million) if the Leafs are able to take full advantage of the CBA rule on hits / AAV's for late-signing RFAs. "

Nylander scored 20 goals and posted 61 points a year ago.