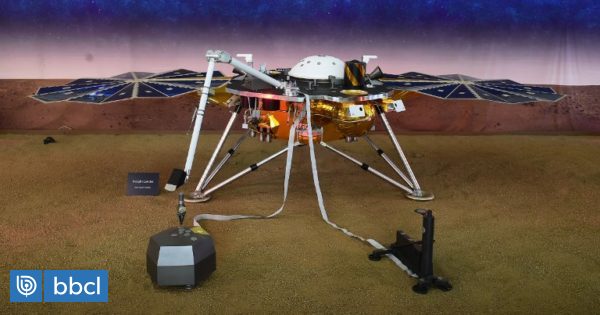 Mars? Why not build a base on the Moon better? They want some. In fact, we know it better and are closer to Earth. The Moon is a springboard to other celestial bodies. In addition, we use it as a gravitational ramp to accelerate and save fuel with our space probes.

The human being visited the Moon in the sixties and seventies. And the astronauts returned home healthy and safe. And without the Apollo missions, we would never have dared to dream of InSight.

InSight was launched on May 5, 2018, with an Atlas rocket, from California. His landing took place yesterday November 26 in the Plain of Eliseo, on Mars, after seven years of work and seven months of space travel.

The excitement and sobriety overflowed the control center of the NASA Jet Propulsion Laboratory in Pasadena, California. Thus the historical achievement lived.

The process was perfect: the activation of the parachute, the deployment of its legs and the speed reduction of 19,800 km / h at 8 km / h in just seven minutes.

Travel to the past

The curiosity and fascination to know how Mars is immense. The more you know about Mars, the more we understand our Earth. We already know a lot about our solar system, but not about the formation of the planets. "We believe that heat occurs when gas and dust collide in the solar system, thus forming a planet thanks to the force of gravity. It is so much the heat that the planet melts, "explains Suzanne Smrekar, deputy director of InSight mission research projects.

Then, "the planet cools and crystals begin to form", adds Smrekar. Heavier materials sink and form the mantle of the planet. Iron and nickel form a metal core, while the lighter material ascends to a primary crust. These are basic structures that share the rocky planets, such as Earth and Mars. Its layers, mantles and nuclei, however, have a different chemical composition. These are just the layers that InSight will investigate on Mars.

Taking the pulse to Mars

The Moon has revealed some, but not all secrets about the emergence of the planets. "Neither the pressure nor the internal temperatures of the Moon are as high as on Earth and on Mars," says Smrekar.

InSight will measure the thermal conductivity of the red planet with a "heat flow probe" and record the movements of the tectonic plates, as well as other seismic activities. The probe will also check how much the Martian North Pole is moving while Mars is orbiting the Sun. In this way, researchers want to find out if the nucleus of Mars is liquid and if it contains another metal other than iron.

"Earth and Mars are two rocky planets emerging at the same time," explains Annick Sylvestre-Baron, deputy chief of the project, who adds that "while the Earth is still alive, Mars became a desert ice cream some 3.5 billion years ago" . The French system of seismic measurement CNES will take the pulse to Mars. And the HP3 heat flow probe, developed by the German Aerospace Center (DLR), will do its own. HP3 will penetrate about 5 meters the Martian soil.

"Humanity needs to know where it comes from and where it goes," concludes Sylvestre-Baron. So, if everything works, InSight can teach us more about our solar system and reveal secrets about life on Earth.