The CNI agent that surprised Providencia with coffee 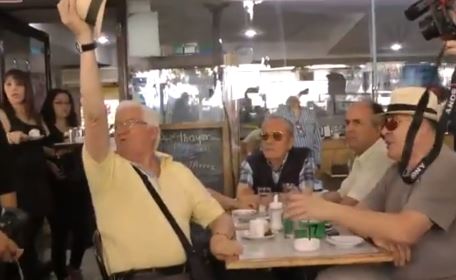 Mark Spiro Derpich Miranda, as well as "gypsy" or "Nicolas Bavarovic", was shocked A bunch of people with banners and loudspeakers started shouting "killer" while enjoying coffee and along with other friends in the municipality of Providencia.

This information was revealed at the Press Opal Chile news site Spiro was the deputy director of the repressive CNI and head of regional news in the Pedro de Valdivia barracks in Concepción.. In that position, he planned and directed a huge operation and nearly 200 agents were mobilized, neutralized and eradicated by five cities in southern MIR countries.

In the pictures you see the former military kidnapped by the fraud of the demonstrator. For a moment he wanted to worry about the situation by removing his hat and shaking his hands with his opponents.