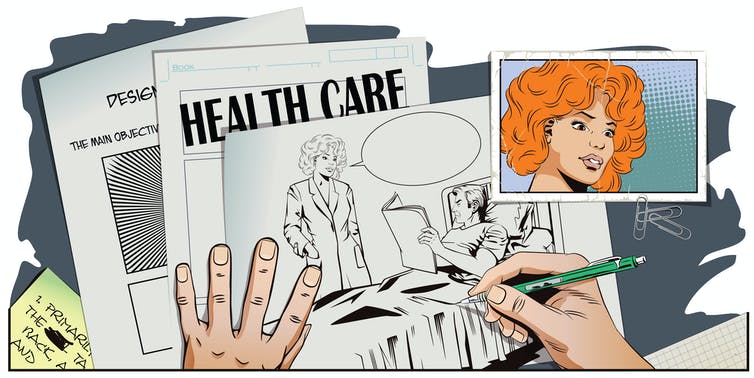 The term graphic medicine, a crossroads between comics and health, was coined in 2007 by Welsh doctor Ian Williams. The same author, along with his collaborators, has this year defined Graphic Medicine as “the interdisciplinary field of medical humanities that encompasses the creation, use, and study of comics in medicine and health”.

In 2010, Michael J. Green and Kimberly R. Myers, in an article based on the use of comics in medical education and patient care, coined the term graphic pathography and defined “the narrative of disease in graphical form”. These works are at the heart of Graphic Medicine and are a great way to communicate doctor-patient.

Graphic pathographies existed long before anyone defined them and, in most cases, were (and are) performed by patients. The first to appear in Europe was cult work Epileptic: the onset of a major illness David Bk (1996). In this cartoon with a claustrophobic design in black and white, how his brother’s illness marked his life and that of his family.

He tells us about his journey through the endless false therapies his parents used, the frustration of each, the physical and psychological change of his brother, the pilgrimage to different medical appointments, and the wall of impotence that constantly clashed. . Epilepsy, an incurable disease, came into David’s life like an elephant in a Chinese shop, marking his childhood and that of his brother.

Epilepsy of the great disease

There is a very significant phrase in the preface that my sister wrote for the comic: “The only certainty in my life is Jean-Cristophe’s illness: the epilepsy of the great evil.” David B. uses a lot of black ink to convey that feeling. Anyone with or having similar family security will be identified in many parts of it. At least that’s the idea.

In literature (and in ordinary discourse), metaphor is a semantic device where a real object is identified with an imaginary one. The first definition of metaphor comes from Aristotle: “Metaphor is the naming of one thing to another.”

Disease and its metaphors

Susan Sontag, who has had cancer twice, disliked metaphors that were used to talking about certain diseases: “The concept of disease is never innocent, but metaphors can be said to be implicit in genocide.” She said she was talking about tuberculosis, AIDS and cancer. metaphors created a completely irrational fear of disease.

Graphic pathography, among other resources, has many visual metaphors, I would venture to say, that would be to Sontag’s liking.

At Blue pills (Frederik Peeters, 2001) The fear of diagnosis is represented as a giant rhinoceros with scary eyes sitting among the protagonists of the story. Alice in the real world (Isabel Franc and Susanna Martín, 2010) turns the protagonist’s face into a face Scream by Edvard Munch.

Two different but unmistakable ways to convey the same feeling to the reader. Sometimes the opposite is true, the authors use the same visual metaphors. Thus, the effects of morphine are represented in calming spirals My breast story (Jennifer Hayden, 2015) and year Paul Quebecen (Michel Rabagliati, 2009).

But, what do graphic pathologies help the patient?

There are many diseases with high social stigma: cancer, depression, schizophrenia, epilepsy, autism, bipolar disorder, Alzheimer’s, among others.
Graphic pathographies can provide the reader with information about a disease in books and sometimes without consulting the technical language used in medical consultations.

Knowledge is the only way to alleviate the atavistic fear of certain diseases. Moreover, when naming fears and negative feelings, the patient feels a sense of belonging to a community, not just being alone.

The realistic and sweet treatment of these works ends the solidity in the patients when they realize that they have surpassed and lived to draw others. For the peace of mind of patients, there are no self-help messages in these jobs: “You have to be positive” or “You have to fight”. These messages place a completely unfair and disproportionate burden of responsibility on the patient.

The best thing about graphic pathographies is that they give the patient a voice, helping to further humanize medicine. The patient speaks and the doctor listens. The idea is that the doctor behaves appropriately to close the communication cycle.

Because of all this, in recent years, medical schools around the world are buying graphic pathographies for their libraries. It is a way to teach medical students to understand and listen to patients ’stories. When a patient feels and draws this information, he or she is creating new knowledge that will be available to future physicians and patients.

Also, not everything you want to tell in the graphic story is explicitly written. Some parts of the story need to be completed by the reader. Therefore, this tool can be used in the training of future physicians. In the practice of professionals, patients will have to deduce information from incomplete stories told.

Learning through comics in medical schools.

For graphic medicine to take its place in the training of future physicians, a number of obstacles must be overcome. One is that unfounded prejudice is that comics are stories for children or young people. Another (and not so important) is to find a space for comics in the satisfied curricula of medical students.

They are working in this direction in several medical faculties around the world. The Pennsylvania School of Medicine (USA) has had a course taught by physician since 2009 by Michael J. Green. There, students reflect critically on some of the comics and create stories about their experiences as medical students.

Similar seminars are also held at Feinberg Medical School in Chicago, USA, and Toronto, Canada. There is a very strange initiative at Yale University (since 1998) and Harvard University. They organize a course to improve the observation skills (and therefore diagnosis) of medical students who use the artwork.

In Spain, as part of a project for teaching innovation, the degree in Physiotherapy from the University of Almería reflected on certain aspects of their professional practice for students with the help of various comics. In addition to accessing graphic pathographies for the library at the Faculty of Medicine of Albacete (University of Castilla-La Mancha), an exhibition and a series of lectures show students some aspects of Graphic Medicine. Gradually, many universities around the world are, in one way or another, planting seeds in the hope that they will germinate in our students.

Since its inception, Graphic Medicine has not stopped growing. Graphic pathologists are appearing all over the world (as Susan Sontag would say) to explain the healthiest way to get sick.

This article was co-written by Blanca Mayor Serrano, who is a lecturer at the Master’s in Comics and Education at the University of Valencia.