New rules apply to the operation of stores from today 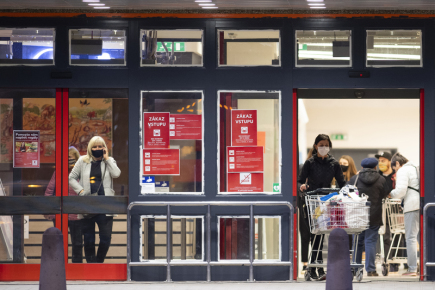 Prague – New rules apply to the operation of shops from today. Each customer must have an area of ​​15 square meters when purchasing. Vendors must manage queues inside and in front of stores and monitor compliance with the two-meter gap between people. At the same time, the closing time is extended from the current 19:59 to 21:00, after which the toque-queda applies. Except on Sundays, retail stores are not allowed to operate on public holidays.

Control of compliance with the new regulations in most food chains was concerned with safety. Some networks have reduced shopping carts and trolleys to a number that correspond to the content of the store under the new rules. For example, in Penny stores, customers will only be able to enter with wheelchairs so that staff can more easily monitor their compliance. According to Tomáš Kubík, a spokesman for the Penny Marquet, the usual area of ​​their stores is between 700 and 830 square meters. In most stores, a maximum of 45 to 50 people can shop at a time, he said.

The chains have decided to strengthen the operation of ATMs and anti-sales operations so that customers can manage them as quickly as possible. Due to large restrictions, queues can still form in front of stores. Vendors are also afraid that they will not provide service to all customers. In the case of Bill supermarkets, this could affect up to half of the people, company spokeswoman Dana Bratánková said.

The government has strengthened measures aimed at retailers and shopping centers with the new pandemic system (PES) linked to the fight against coronavirus. The alert is divided into five levels. Each has a specific risk score, which is calculated according to the selected epidemiological parameters. The limit of 15 square meters per person applies from the third degree.

The hours of shops and malls are combined with local coverage at the highest alert levels of four to five. According to the current government resolution, an exemption applies to transactions in the case of Sunday sales that can be opened only until 19:59 on the last day of the week. As for the fourth level, the toque-queda is set for 11 p.m. From the third level onwards there are no opening hours and all shops and shopping malls can operate. In the fourth and fifth stages, the operation is limited to basic goods stores and e-shop outlets.