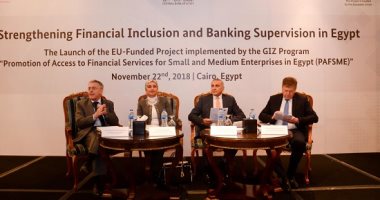 In collaboration with the Egyptian Central Bank (ECB), the European Union and the German Confederation of German Embassies, "3.2 million euros of financial coverage, supervision and supervision financing program" was launched, consisting of three years of technical assistance, to support the efforts of financial inclusion and to strengthen the banking control framework..

Today, at the time of the announcement of the program, the Egyptian Central Bank stressed that the coverage of finance is one of its priorities and policies, and there is a coordination between the parties that influence the country at national level – especially those who do not receive financial services – saving financial wishes and to provide micro, small and medium-sized businesses with the possibility to create finance, investment, growth and employment..

The Sourcoush Ambassador, in accordance with the Egyptian Delegation of the EU, stated that the Central Bank's appreciation for the efforts made in the process of achieving economic reform. He emphasized the peculiarity of the EU contribution. A special financial inclusion and stability program will be established..

Mr. Gamal Najm, Deputy Chief of the Central Bank of Egypt, and Mr. Lubna Hilal, to report on the latest advances in the supervision and supervision of bank and financial coverage. "The Egyptian Central Bank is continuously working to increase the technical capacity of the control sector, as well as the Bank's supervision and banking governance in accordance with international standards and best practices."

Mrs. Lubna Hilal made efforts to develop scientifically based policies of the Central Bank of Egypt by measuring the levels of financial coverage, trends, and challenges across the republic. "We have been able to compile a large number of basic data to prepare the first financial inclusion report, how to continue this important work on a local level"He said.

On the other hand, the German Ambassador, Julius Georg Lui, said that Germany had a good deal of support in Egypt for a long period of financial surveys, and families and companies could see a significant improvement in financial services and the "German Agency for International Cooperation" Project In Egypt, the Central Bank refers to smart financial hedging policies in the Arab world and beyond.

On a local level, financial inclusion became a priority when the Egyptian government launched the Sustainable Development Strategy: Vision 2030 to improve financial coverage and implement its own initiatives with close coordination with stakeholders. In order to institutionalize this process, the Central Bank of Egypt (Central Administration of Financial Inclusion of 2016 November 2016) was led and monitored the process of financial inclusion and improved coordination and cooperation with the interested parties.

The policy of promoting financial inclusion is intended to finance the peculiarities of women and men, especially in particular. These efforts have shown a significant improvement in financial inclusion indicators over the last two years in the FINEX Index "Global Findex" The World Bank published in 2017 and reached 33% in 2017 in adulthood, 2014 was 14% in 2014 and 10% in 2011..

The Egyptian Central Bank of the Program will make every effort to complete a database on a national level, through a measurement and measurement of financial coverage levels, to cover the domestic and MSME aspects. The survey will be conducted in 2019, coordinated by the corresponding authorities.

At the level of the supervisory and supervisory sector of the Central Bank of Egypt, the sector saw its reform programs in the last decade. The supervisory methodology followed by the regulatory guidelines has been adapted to the risk perspective. In addition, the banking monitoring system has been developed and the Bank has taken Basel II decision II andIII – According to the schedule given by the Bank Audit Office of Basel. This project will direct the final adaptations of the Basel Framework III (Known as the Basel II Framework), the Supervisory Survey and the Banking Bank's process, enhancing financial stability and helping to finance transparency and disclosure in the banking sector. In addition, a comprehensive macro-risk framework will be implemented through policy, analysis and coordination tools. Financial framework for financial and financial policies and bank reporting. Thus, in general, prudential risk areas will help the Egyptian Central Bank to become a strong and stable financial system in Egypt..

The Congress dealt with current and future reform policies of the Central Bank of Egypt. Representatives of departments of supervision, auditing and financial coverage presented developments and characteristics of major reform programs, emphasizing the importance of cooperating with the European Union and sharing good practices with other countries..

The program is funded by the "Financing of Financial Services of Small and Medium Business Companies", funded by the Federal Ministry of Economic and Financial Cooperation, with the aim of improving access to these financial institutions, as well as financial banking services that are not financial intermediaries. Equity financing and small and medium-sized insurance companies.