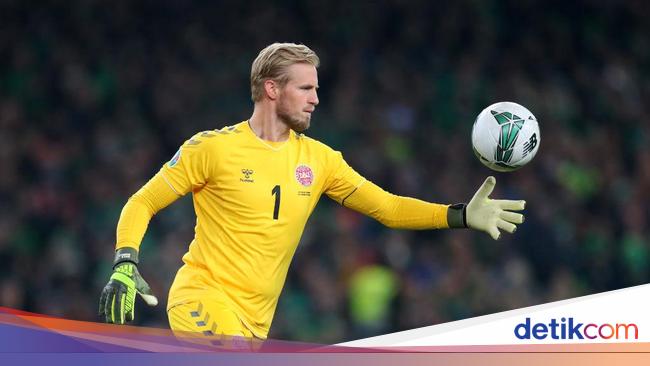 The goalkeeper of the Danish national team as well as Leicester City, Kasper Schmeichel experienced a moment of horror. He was almost seriously injured in the head after hitting the legs of a running player.

That was yesterday when the Danish national team took on Iceland on Sunday (11/11). Denmark can win by three points with a narrow 2-1 victory.

But at the end of the first half terrible things happened. The Danish goalkeeper, Kasper Schmeichel, went to secure the ball.

Kasper Schmeichel caught the ball and dropped the body. However, Icelandic striker Albert Gudmundsson was running towards him.

Unfortunately, Schmeichel ran down to Gudmundsson. Schmeichel hit Albert Gudmundsson in the head, put the goalkeeper on the mobile and immediately received treatment.

However, Kasper Schmeichel was still on the pitch a few seconds before the end of the first half. Only in the second half, they were immediately replaced.

“Schmeichel is in good shape. He looks bad, but there are no problems in his head,” Hjulmand told the press. The mirror.

“Checks will continue. We hope to be well,” he continued.

Kasper Schmeichel himself could miss defending Leicester in the Premier League next weekend against Liverpool.

The head injury is a ‘nightmare’ for the goalkeeper. One of them was experienced by Chelsea goalkeeper Petr Cech in October 2006 against Reading.

In the game against Reading he was guarding Chelsea’s goal, Cech was slipping the ball safely and there was also a player against Stephen Hunt who was running fast towards the ball.

Cech had to stay for a year to heal. The doctor said: Cech almost lost his life.

When he returned to the field, Cech wore a special protective helmet. Actually, it’s called a scrum cap.

The International Rugby Council (IRB) provides fairly clear rules for this scrum hat material. The material should be smooth and fine, while rigid materials such as plastic and ears are prohibited. The helmet or armor used in ice hockey is very different, i.e. it is a rigid and hard material.

Parts of the hat are prohibited from thickening by more than one centimeter under stressful conditions, and the parts must not have a density of more than 45 kg per cubic meter.

Wearing the cap has become a hot topic of conversation on the pitch in terms of goalkeeper protection. Some people think it’s a good idea to wear a hat. However, so far this has not materialized.