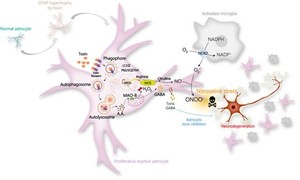 A Korean research team has identified new pathogens for dementia and various brain diseases, which has made it difficult to determine the exact cause.

Changs Joon Lee and Hee-Jung Jeon, director of the Cognition and Sociality Research Group at the Ministry of Science and ICT, and the research team of Ryu Hoon, director of the KIST Brain Science Research Institute at the KIST Brain Science Research Institute, cause cell death and dementia in early dementia. through the reactive star cells that appear in the phases. He said he has confirmed the mechanism.

In the case of Alzheimer’s dementia, which accounts for more than two-thirds of dementia patients, it has been widely suggested that waste proteins such as “beta amyloid” or “tau” are usually trapped in the brain and the causes of dementia have been widely hypothesized. come.

However, even if these proteins are removed, severe dementia continues or, conversely, there are cases where the amount of protein waste that does not occur with dementia increases, so it was argued that it was not the true cause.

Instead of waste protein, the research team has done research to look for other causes and has turned to “reactive star cells”. Star cells typically maintain a constant state of the brain, and when they encounter a toxic substance, their size increases, the number of branches increases, and their function changes. Star cells that have changed in this way are called “reactive star cells.” The researchers diagnosed the potential cause of dementia.

Through animal experiments, the research team confirmed that reactive star cells divide “lightly”, recover quickly to their original shape, and “severe,” which do not return to their original state over time due to severe deformation. did. It was revealed that the magnitude of the response of star cells is related to the induction of dementia.

According to the research team, “a protein called monoamine oxidase B (MAO-B) is activated by star cells in the process of decomposing toxic substances in the brain. Reactively in stellar cells, this protein produces too much hydrogen peroxide.

Hydrogen peroxide is a substance with a strong “active oxygen” that causes a chemical reaction and is so toxic that it is often used as a disinfectant. Hydrogen peroxide produced by too many stellar cells has been shown to cause severe reactive stellar cells and cause inflammation and chemical transformation in the brain, eventually killing nerve cells.

The researchers confirmed that dementia progression is eliminated only by reducing hydrogen peroxide targeting reactive star cells, and plan to establish and implement a new dementia diagnosis and treatment strategy containing MAO-B or hydrogen peroxide.

The research team intends to develop a technology for early detection of dementia by diagnosing reactive star cells and developing a treatment that can restore reactive star cells to their original state. In addition, the results of the study will be applied to other brain diseases in which reactive star cells, such as Parkinson’s disease and brain tumors, appear.

Director Chang-joon Lee said, “We recently revealed that reactive star cells, which have been considered a byproduct of Alzheimer’s dementia, are the leading cause of neuronal cell death,” he said. “I hope it will help patients with dementia.”

The results of the study were published in the international journal Nature Neuroscience.