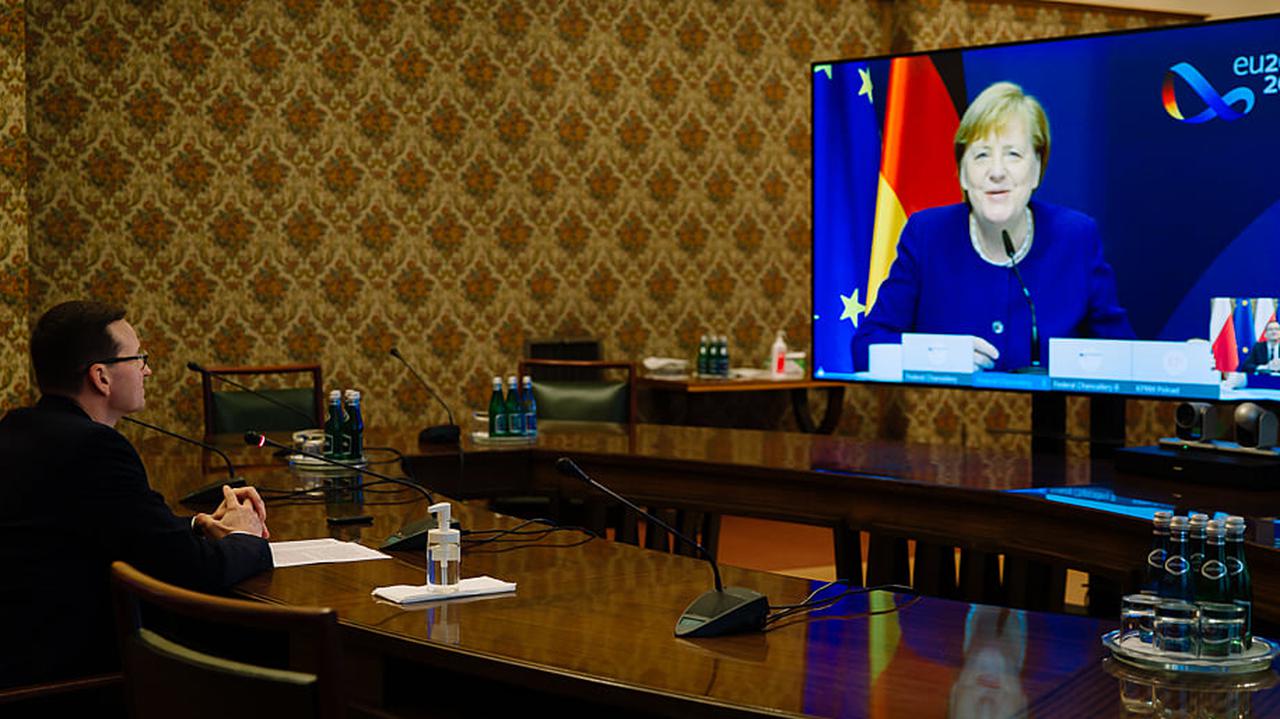 Prime Minister Mateusz Morawiecki had an interview with Angela Merkel on Friday. According to the head of the Polish government, the German chancellor has confirmed that he is ready to veto the Polish budget. The Prime Minister also responded to a letter from European Commission President Ursula von der Leyen.

On Friday, the prime minister had a telephone conversation with the German chancellor, including negotiations on the EU’s multi-annual budget for 2021-2027, including regulations on the mechanism for linking the budget to the rule of law, against Poland and Hungary.

The interview began at 11 p.m. After the interview, the head of the Polish government announced via a Facebook message that “the meeting was held in a good atmosphere respecting the difference in our attitudes.” “The joint success that ended with the July budget negotiations must now be turned into the right legal provisions, which will then be accepted by all EU countries,” the prime minister said.

“At the beginning of the dialogue, I reiterated that we would defend the right of European states to implement changes and reforms, as well as the letter and spirit of the treaties, which constitute the first law and are above any other legal and secondary mechanisms contained in current European Union proposals. and the starting point for more dialogue, ”said Mateusz Morawiecki.

As he added, “the current draft regulation on the protection of the EU budget has not been approved and cannot be accepted if there are general shortcomings in the rule of law in the Member States.” “We and the Hungarians opposed it. I made it clear that the safety valve, which was in veto mode, must be a guarantee that the rights and concerns of all Member States will be taken into account,” he added.

“I also confirmed that we are ready to veto the new budget.”

The head of government warned that Poland was constantly on the lookout for EU regulations to comply with Council of Europe treaties and decisions. “I said today, Madam Chancellor, that Poland expects more work to find a solution as soon as possible to a solution that will ensure the rights of all member states and respect for treaty procedures,” Morawiecki wrote on Facebook.

He added that “it requires not even an in-depth analysis of our arguments, from the perspective of the current conflict, as well as the coherence and future of Europe.” “I also confirmed that we are ready to veto the new budget if we do not find a solution that is good for the EU as a whole and not just for some members,” said the Polish head of government.

Prior to the interview, Piotr Mueller stressed in a document posted on the Government Information Center’s website that Morawiecki’s agenda for talks with Merkel also includes “current EU issues”. A government spokesman recalled that Mateusz Morawiecki had held a meeting with Hungarian Prime Minister Viktor Orban on Thursday to sign a statement agreeing on a critical stance linking budget payments to “arbitrary and non-objective criteria for violations of the rule of law”.

“Poland constantly believes that EU regulations must comply with treaties”

“Poland and Hungary believe that EU regulations must comply with the Treaties and the decisions taken at the July forum of the Council of Europe,” Mueller wrote in a statement. He stressed that Poland and Hungary had not expressed support for the entire financial package, which includes the EU’s 2021-2027 multi-budget budget and the so-called. COVID-19 Reconstruction Fund, which includes emergency resources to deal with the effects of the crisis related to the pandemic.

“Poland constantly believes that EU regulations must comply with treaties and decisions taken at the Council of Europe forum and ensure legal certainty. Any rules on the protection of the EU budget should ensure an effective way to prevent fraud and financial irregularities,” the government spokesman wrote.

“The current draft regulation does not guarantee this certainty. The criteria contained therein are general and subject to very broad interpretations. This is a departure from the principle that the sanction must be based on a specific violation of a specific law. “This control should be based on strict and rigorous criteria. However, it cannot be based on a free assessment, under the pretext of protecting the rule of law, away from verifiable evidence. Poland is opposed to arbitrary mechanisms that could disrupt EU unity in the future.” Mueller added.

Also on Friday, a government spokesperson reported that the Prime Minister had responded to a letter written by European Commission President Ursula von der Leyen about the link between the budget and the rule of law. In his first letter to EU leaders, two weeks ago, Prime Minister Morawiecki reaffirmed the Polish government’s stance against conditionality mechanisms linked to the EU budget. “Poland cannot accept the version of these mechanisms that achieves the supremacy of political and arbitrary criteria over substantive assessment,” he said.

The first letter was answered by the head of the European Commission, Ursula von der Leyen, and, according to unofficial information provided by the PAP, was also addressed to the head of the Polish government this week. The EU president wrote this week that the condition has a direct link to good financial management and not violations of the rule of law. He explained that the regulation only deals with breaches that may affect the management of EU funds and the financial interests of the EU.

According to unofficial information provided by Polish Radio, Prime Minister Mateusz Morawiecki maintained his position in his letter – a veto on the budget package.

EU member states did not unanimously reach a decision on the long-term EU budget and reconstruction fund last Monday. Poland and Hungary created reserves in connection with the rule of law related to the so-called EU funds. The regulation was approved by a qualified majority of Member States.

The current negotiations are being conducted by the German presidency. Chancellor Angela Merkel said after Thursday’s EU video broadcast that Hungary and Poland should continue talks. “There is consensus on the EU budget, but not on the mechanism of the rule of law,” he stressed. Germany, which currently holds the EU presidency, has promised to look into all options.

Prime Minister Mateusz Morawiecki had earlier announced that Poland would certainly exercise its right to oppose it if it did not reach an agreement to satisfy the rule of law with EU budgets in Warsaw. Hungarian Prime Minister Viktor Orban wrote a letter to the German president and heads of EU institutions, threatening to veto the EU budget and the reconstruction fund if the payment of the funds was linked to the rule of law.