Exclusive video “I’m not arguing with you.” He was hired by moderator Ilie Dumitrescu at the time. Ianis Hagi, the apple of discord 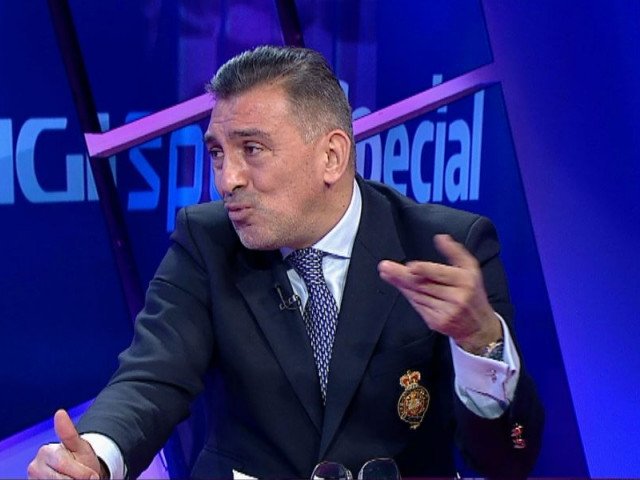 The “king’s” son, who is already a regular in the first team, was left in the “small selection” by Mirel Rădoi in this decisive match, the last in the previous set, to provide support.

See the conversation between the two below:

Ilie Dumitrescu: “I noticed several players who went up to a good level, Olaru, Moruțan, Ianis Hagi, who was active.”

Vali Moraru: “No, Ianis Hagi has done nothing”

Ilie Dumitrescu: “Now we expect it from Ianis, but there was a lot of pressure at the team level. And Mățan also played very well. That’s why I say there were players who rose to a certain level.”

Vali Moraru: “Well, Ianis Hagi too? Tell me what he did very well.”

Ilie Dumitrescu: “I respect your opinion, but I see other things. He was very active.”

Vali Moraru: “What? That he passed the ball?”

Ilie Dumitrescu: “Yeah, because he risked more. I’m not arguing with you. There are different opinions. The bottom line was very good, Marin too. We could have equalized through the game, but you can’t play in a level game.” It’s good to score in the end. In the end, Ianis plays at the highest level, he is in the Rangers, a traditional western team. 3-4 players to finish you off. It may not have been a very good evening in terms of efficiency, as a final pass or to bring that extra. But I generally liked it. You need a player to always be active in the game. With a negative result we could say that he did not rise to a very good level, but at many moments he passed the ball to reach others. “

Romania U21 – Denmark U21 1-1. Ilie Dumitrescu, impressed with the last 10 minutes of the game: “I’ve never seen anything like it”

Ilie Dumitrescu was impressed with the last 10 minutes of play. From the 83rd minute until the end, the “tricolors” were constantly on the move, and the Danes did not attack them.

“The Danes were happy with that result, as they only came into the box once in the second half of the game, and the referee gave a free kick, a penalty. We had consistency in the game and deserved the victory.

After all, when there are 10 minutes left and you see that your opponent doesn’t want to lose, we were in a position to take part in a scenario like this and not have a chance.

And we played the last game in the team to qualify for the draw. By the way, we lost in Ukraine, 11 meters that did not exist. And if we didn’t lose we would have qualified.

I was well in possession. I thought it was 10 minutes in a row. Did the ball come out at that time? I’ve never seen anything like it. “, said Ilie Dumirescu.

After a 1-1 win over Denmark, the “tricolors” qualified for the second time in a row at Euro U21. In 2019, under the command of Mirel Rădoi, they reached the finals.

Now trained players Adrian Mutu They finished Group H in 2nd place and thus the best second places going to the last 5 championships were ranked in the top 5.

The 16 ranked teams, i.e. the two host countries, the winners of the nine qualifying teams and the top five runners-up, will be divided into four teams from each of the four teams.

The 2021 Euro 2121 group phase will take place between 24 and 31 March. The first two qualifiers in each set will qualify for the quarter-finals of the qualifiers, interspersed with a special situation here, two months after the end of the group stage.

Specifically, the final stages of the European Championships, the qualifiers, will take place between 31 May and 6 June.

Draw EURO 2021 U21. When Romania finds opponents in the final tournament

His tricolors Adrian Mutu they will meet opponents as a team Thursday, December 10th, after the draw Nyon.

The 16 teams that qualify will be divided into four groups, the hosts Hungary and Slovenia automatically divided into group A, respectively B. Other formations will be distributed according to the coefficient.

The first two qualifiers in each set will qualify for the quarterfinals. Last action EURO 2021 U21 is scheduled June 6, Ljubljana.

Photo from the gallery