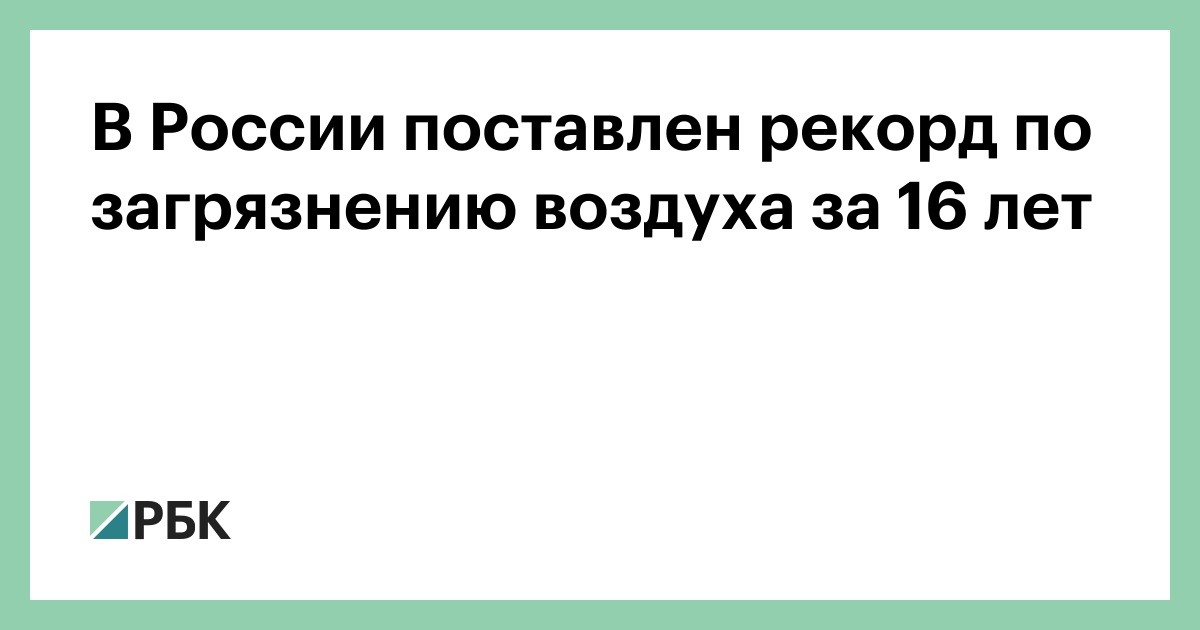 As it was thought

The study was conducted based on Roshydromet data. The department measures atmospheric air quality through a system of stationary and floating observation points. These points are established by considering the location of objects that may harm the environment. Owners of companies that could cause serious damage to the environment must install monitoring systems in their production facilities.

In addition, specialists conduct episodic environmental studies and work with a system to predict high air pollution in times of adverse weather conditions.

According to FinExpertiza, the main pollutants in the regions are benzpyrene, a highly toxic combustion product and hazardous carcinogen, as well as hydrogen sulfide, a poisonous gas produced in industrial plants and landfills. Cases of air pollution with lead, formaldehyde, ethylbenzene, hydrogen chloride, carbon monoxide, and nitrogen dioxide were also recorded.

RBC sent inquiries to the Ministry of Roshydromet, Natural Resources and Rospotrebnadzor.

How the dynamics of pollution changed

In the first winter months of 2020, the number of air pollution registered by specialists from the Federal Hydrometeorology and Environmental Surveillance Service (Roshydromet) increased by one and a half times compared to the same period last year – from 27 to 44 cases -. As a result of the pandemic, there were days off and quarantine in the spring and until the end of June, only two cases of high air pollution were recorded. As a result, in the first quarter of the year, a five-year record was set in Russia in terms of air pollution levels.

In July, when the most severe quarantine reductions were canceled in the regions, a lot of air pollution began to grow month by month. In the third quarter of 2020, 125 cases of high and very high atmospheric pollution were recorded. For comparison, experts recorded almost the same amount of pollution – 126 – for the whole of 2010, a record that was previously a record for the sixteen-year period of statistics available on the number of toxic emissions into the atmosphere (since 2005). 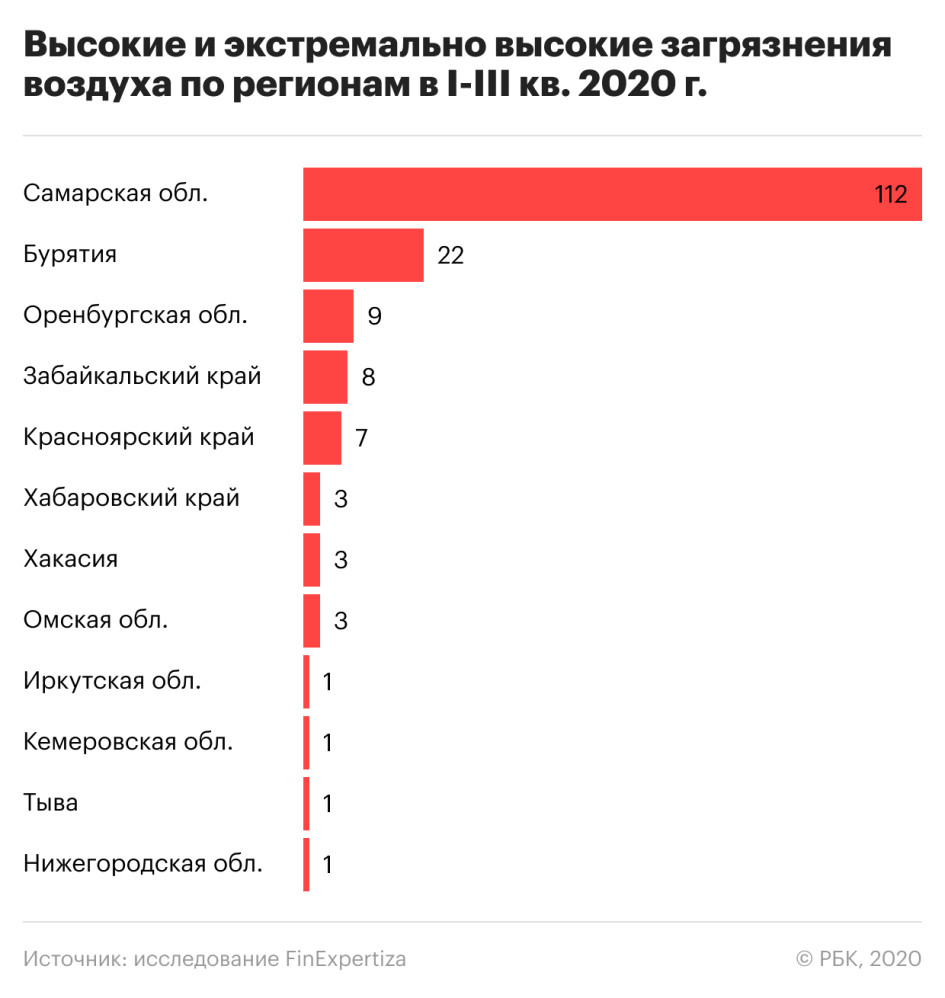 A quarter of the cases of air pollution recorded in 2020 occurred in the winter. According to FinExpertiza, this is due to the beginning of the warming season, when traditionally the negative impact on the atmosphere increases. “However, the feature of 2020 was a sharp increase in pollution in July, August and September,” the report says. “Only in September was more pollution recorded than last year.”

According to experts, the disappointing statistics are mainly due to the jump in the amount of high air pollution; so far the amount of very high pollution has remained at a stable level – four events were recorded in the nine months of 2020, as in the same periods of the previous two years.

In which region is the situation most worrying

According to the report’s findings, by 2020, air pollution incidents were mainly concentrated in several regions. More than half – 112 – fell in the Samara region. They reminded that the authors of the study have a developed industry and a car industry. Buryatia (22 cases), the Orenburg region (9), the Baikal Trans Territory (8) and the Krasnoyarsk Territory (7) continue to have a high amount of air pollution. Samara, Selenginsk (Buryatia), Chita (Baikal Trans Territory), Ulan-Ude and Krasnoyarsk are among the cities with the highest recorded air pollution.

There is the largest AvtoVAZ car factory in the Samara region and other companies that are part of the value chain with it. Among others, the Ulan-Ude Aviation Plant operates in Buryatia, the PJSC Rosneft companies are located in the Orenburg region and the Chita Machine Tool Transbaikal Factory. Krasnoyarsk has already entered the Russian cities with the strongest emissions into the atmosphere because of the Norilsk Nickel.

In August, FinExpertiza named the regions that are leading in total emissions of pollutants into the atmosphere. The list includes Krasnoyarsk Territory, Kuzbass, Khanty-Mansi Autonomous Okrug, Sverdlovsk Region and other issues.

Why is air pollution growing?

Roman Pukalov, director of the environmental programs of the Russian public organization Green Patrol, has suggested that the increase in the number of pollution incidents has been increased. He disagrees with a statement that the number of emissions to the atmosphere will increase significantly by 2020 – moreover, he began to study the air situation more frequently as part of the federal “Clean Air” project.

“The picture we take of the regions is not pink, we don’t have the excellent state of the environment in any town,” Pukalov says. “However, it improved in the spring: the volume of air pollution caused by cars and exhaust fumes has dropped significantly.” In his view, the authors of the FinExpertiza study were unable to pay sufficient attention to the risk class of the contaminants, the location of the discharge source, the height and the degree of dispersion of the emissions.

The authors of the report acknowledge that the increase in the amount of pollution can be caused by emergencies, such as industrial accidents. In total, since the beginning of the year, a dozen major accidents have occurred, and as a result, toxic substances are released into the atmosphere, but not all of them have led to an excess of acceptable concentrations.

Among the incidents that affected local air quality were a fire in the Ukhta (Komi Republic) oil refinery in January, a fire in Yaitskoye village in May, a gas pipeline in Verkhnyaya Podstepnovka, a fire in Syzran refinery (Samara region). polyethylene and paint and varnish depot in Samara, forest fires in the Tashlinsky and Pervomaisky districts of the Orenburg region, 100 liters of nitric acid spill at the Izhevsk mechanical plant in Udmurtia, fire at the Nizhny Novgorod paint and varnish depot, etc.

“In the early days of the coronavirus pandemic, there was often an opinion that closing companies and reducing traffic flow would have a positive impact on the environmental situation,” said Elena Trubnikova, president of FinExpertiza. “However, the truth is that the situation has not been so ambiguous: as major industrial facilities continue to work, the pandemic could be pushed back into the background in terms of meeting environmental requirements.”

According to Vladimir Burmatov, chairman of the State Duma Committee on Ecology and Environmental Protection, the state of atmospheric pollution in the regions has a direct bearing on the problems with the implementation of the Clean Air project. “I recently saw positive official data on emissions, and it surprised me because I visit all of these regions and I know the situation is not improving,” he told RBC. According to the deputy, since 2019, none of the regions involved in the Clean Air project has received any money from the federal budget: in 2019, the Ministry of Natural Resources failed to prepare the relevant document and in 2020 the funds returned to the reserve fund coronavirus pandemic. “Enforcement of the presidential decree is under threat, despite the fact that the governor is directly responsible for the project,” Burmatov said. “In some regions, it is still forbidden for certain situations to go outside due to bad weather conditions, when the air is stagnant and all these emissions are not dispersed.”

In the draft budget for the period 2021-2023, the amount of money allocated to the Clean Air project has been reduced compared to the previous budget. In 2021, it is proposed to allocate 13.5 billion rubles for this purpose. less, in 2022 – 13.8 million rubles less. The explanatory note to the bill states that the money will be channeled to other projects within the national “Ecology” project, as well as “citizen social support, economic growth and long-term structural changes in 2021 and 2022”.