Serbia in the Finnish “bubble” – a step towards the European Championship 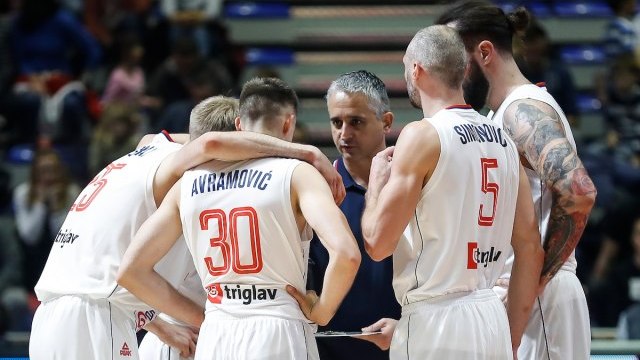 The basketball representative is back – Serbia of Finland has a chance to qualify for the 2022 European Championships.

He gathered the Serbian basketball team and went to Espoo (Finland) to play two Group E matches of the European Championship qualifiers.

Serbia will play two matches on November 28 and 30 at the Metro Espo Hall, and the opponents will be Finland and Switzerland.

It was in this hall that Igor Kokoškov made his debut on the Serbian bench in the official match.

It was February 20 this year and Serbia celebrated in a very believable way – 80:58.

As of now, Kokoškov has only ABA league players and other teams at his disposal, whether they play under FIBA ​​or not in the Euroleague.

This time, one Euroleague player and, of course, the Red Stars, allowed three players to join the national team in the qualifying matches.

Then came the Chinese Miroslav Raduljica and he was the most effective with 18 points in that game, and this time he will not be in the Serbian team.

The second match, later played in Belgrade, we would not want to miss.

We took on Georgia in the century with a result of 94:90, where a tremendous McFadden scored 33 points, followed by an excellent Shermandini with 23.

Serbia have one win and one defeat, and four more games left.

With two victories, Serbia would get a place in the European Championship, as three of the four teams in the group go for EURO.

Serbia will play Switzerland first on November 28 and close out the first round, and the second round will start on November 30 against Finland.

What are we waiting for Espoo in the ‘bubble’?

Igor Kokoškov invited the following players to the duels against Finland and Switzerland:

Aleksa Avramović was the most effective individual of our team in the last two games, and especially stood out in the defeat against Georgia, where he scored 27 points.

He played this season 12 match for Estudiantes in the Spanish league and an average record 14.3 points and 3.6 assistance for each game.

The 26-year-old defender from Čačak will probably also be Espoo’s most reliable player.

Nikola Radičević has played two Promiteas matches in the Eurocup this season and is recording on average 6 points and 4.5 provides support, while Danilo Andjusic scores with the Burg jersey 19.5 points on average.

A striking tandem will be Andjusic and Avramovic, who are currently the strongest scorers in this squad.

The other players who do not play in the ABA league are Dejan Kravić, Nikola Rebić and Stefan Peno.

Kravic scores 10.2 points and 5.3 rebounds per game in Burgos and stands out as the team’s first center.

As for Rebić and Pen, the former from Monaco has 17 minutes in the game and 7 points per game, and the latter from Vehtan has 6 points and 3 assists per game in 25 minutes.

There will be other options for the game organizer.

Aleksa Radanov has only played two games this season in total 9 minutes, while Borisa Simanic played three games 37 minutes in the ABA league, and was on the ground in the Euroleague once and for two minutes.

Partizan’s players are in a better moment and play regularly.

Rade Zagorac notes 10.6 points on average in the ABA league and 6.6 In the Eurocup, while Dangubic scores 8.9 points in the ABA and 5.5 in EK.

One of them will be in the top five.

The rise has two representatives – Stefan Pot and Dalibor Ilic.

There is a pot in the ABA league 9.7 points and 3.5 it helps on average, while Ilic 7.3 points in the regional competition.

Filip Petrushev stands out the most.

Of all the players on the national team, Petrushev has the best statistics and it is realistic to say that he is also the first star of that team.

He makes notes for Mega 20.2 points and 7.5 jumps will be one of the main players in each game and in this team, if not.

Stefan Momirovek du 10.3 average points with a high percentage of shots – 45% in exchange for three points and 55.6% for two people.

Jovan Novak was once the great desire of Zvezda and Partizan 7.5 points and 5 support on average Mege elastic.

Notes for Dragan Apic Buducnost 10.4 points in the ABA and 5.5 At the Euros, Marko Jeremic set the record for Mornar 7.4 points, Stefan Djordjevic for FMP 6.4 points.

We look forward to the top five Radicevic – Andjusic – Zagorac – Petrushev – Apic, while it should play the role of the sixth man Aleksa Avramovic.

Perhaps the most resonant name is Marko Mladjan, a southern center of Serbian origin.

Mladjan was the best in the defeat against Finland (64:69), and Lila basketball player Jonathan Kazadi gave a double and a triple against Georgia.

The biggest risk lies with these two players.

Switzerland lost two tight matches, five points each, one after extra time and are not at all naive.

As for Finland, they are currently 34th in the FIBA ​​rankings.

The Finns have drawn three victories in the last three games, as they beat Switzerland and played two friendly matches against Estonia in July.

The most famous names in their national team are Tenerife defender Sasu Salin and 36-year-old Jamar Wilson, who is currently playing in the Finnish championship.

Sasu Salin scored 25 points for Georgia, and in the 26th minute he didn’t score a single point in the first game against Serbia.

In the five meetings we have had with Finland since 2008, we have held it five times, with an average difference of 17 points.

What did Serbian coach Igor Kokoškov say about his opponents?

“The boys are motivated, the energy is very good. Switzerland and Finland have the same team in every game, and there are a lot of new names for us. Things, there is a lot of new information and they are in front of us in terms of coordination. we have the best way to represent basketball and the national team. We have come to win both games and we will play that way. “ He said Chickens.

You can follow all the games on B92.net through us Live blogging.