Develop the system that shows the cancer cells 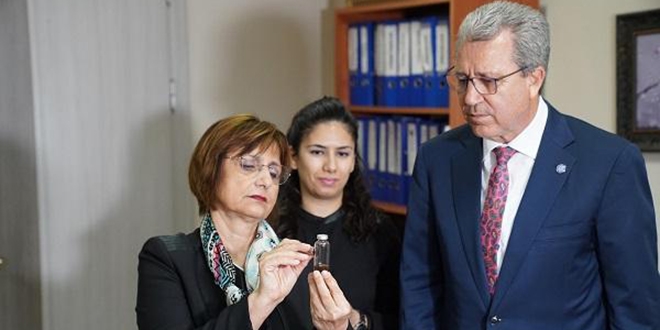 EÜ Professor of the Nuclear Application Department of the Nuclear Science Institute. Perihan Ünak and his team have made an inventive world. As a result of the research on patented invention, the flodeoxyglucose (FDG) molecule of sugar was combined with the magnetic properties of nanoparticles based on iron oxides. The developed systems can be used as MR agent in images of cancer of magnetic hyperthermia (high heat effect). They investigated various patents on cell and animal cells and patent patents. Dr. Ünak, üyor Then there are two things that need to be done: it is working on an industrial scale, and the industrialists are interested in this subject, and the next step is to work in accordance with the law and conduct tests with a number of universities and centers in the United Kingdom and America. Our research has shown that we have destroyed this tumor and its side effects are not significant and healthy tissue do not harm. "

To obtain molecules developed for the conversion of drugs, the necessary legislation must be obtained. Dr. One, "Turkey has a team of working groups on the issue of the application of this molecular field molecule, which also has led to a viable system, so you have to work to create a device that can be used for this purpose. All results in the Labor Market system are expanded in all types of cancer They can also use treatment and images, "he said.

WE USE OUR RESOURCES

This developed molecule has no problem with the images. Dr. One, recalled that the words were imported and a lot of medical supplies for a constant downturn in constant crisis: "We think we should use our own resources, in Turkey, I believe that we have enough scientific knowledge. We also believe that we can produce a business leader and a local industry when handicapped. Scientists can not perform human functioning, investments, and institutional work must be done. The task of the method is to do something, and then the professionals, the industry and corporate identities that work in this field, must help a product. "

The Rector's Chancellor visited the group. Dr. Necdet Budak, working with Egeli academics with no loss of speed, says that "the age of cancer, Perihan and our team will be the most serious problem in cancer treatment and all the images have been invented worldwide. The Aegean University, especially our calls , the treatment and treatment of cancer developed by our scientists as received by our scientists at home and nation, "he said.