Last minute: will there be a toque-queda? President Erdogan has announced! 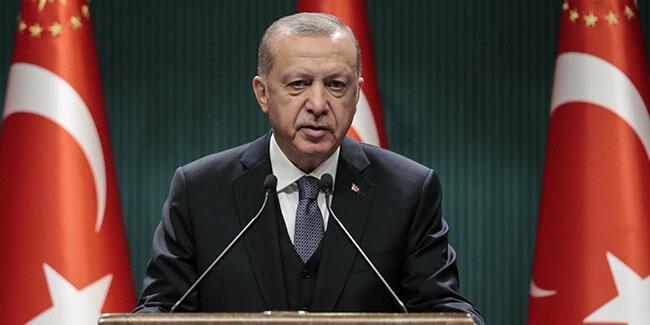 President Erdogan’s remarks are as follows;

Dear nation, dear members of the press, I greet you with all my heart. On Sunday, we paid a visit to the island, marking the 37th anniversary of the TRNC’s proclamation, the most prized work of the Turkish Cypriot struggle for law, equality and existence.

Our visit was attended by MHP President Devlet Bahçeli, our ministers, former parliamentary speakers, parliamentarians and veterans. We took part in the joyous holiday of Turkish Cypriots by taking part in the Republican holiday on 15 November for the first time on the island.

Then we went to the closed Varoshara. The goodwill gesture of the Cypriot Turk never found an answer in the Greek part. The Maras coast was closed to the public. We also support this bold initiative. We paved it in a short time like 15 days. We established services like gardening.

The program we have carried out in Maras is also a statement of our decision to ensure the rapid growth of the region. Those unfamiliar with the Cyprus problem and those who do not understand the strategic importance of opening the closed Varosha will naturally see this program as a picnic. Thank God our nation knows well what the subject is and the meaning of our work.

The earthquake in Izmir reminded our country that it was a natural disaster and allowed us to review our preparations before and after the disaster. I think we did a good test around the earthquake. Since the earthquake, Turkey has begun processing a disaster response plan. AFAD teams immediately set off, leaving teams from the surrounding provinces.

AFAD, a fire brigade, search and rescue team, has begun working with national rescue teams. From the first minutes, police, gendarmes and TAF units took their place in the disaster area with their staff, helicopters and unmanned aerial vehicles.

By the 6th earthquake, more than 2,000 search and rescue workers and 15 search and rescue dogs had set off from other territories by land and air. In the 10th hour of the earthquake thousands of workers were actively involved in field work to meet the 7 basic needs. Negotiations for 100 psychosocial supports began at 12 noon.

In the 48 hours since the quake, more than a thousand tents were set up and used for earthquake victims. More than 8,000 workers and 1,200 vehicles were working within 72 hours in the search and rescue area. Our Red Moon was with the people of Izmir from the very first moment, with all the staff and volunteers.

With all the plans and preparations working perfectly with the organization, the state supported the people of Izmir and Izmir. Firefighters from several municipalities and numerous search and rescue teams were also involved in the work. Of course, these studies have priority. AFAD has undergone serious training to achieve a rapid and effective post-disaster response by holding meetings with non-governmental organizations to assist in search and rescue operations in 11 regions of our country.

Now, after any catastrophe in our country, the voices of “where is this situation” are not rising. The state is always close to our nation from the very beginning and follows all kinds of activities. I would like to take this opportunity to thank the Minister of the Interior, the Minister of the Environment and Urban Development and his team, our Red Moon and non-governmental organizations. I am especially grateful to our armed forces.

We continue with new reforms on our path, raising the ongoing goals of the world’s goals. We had the presence of our nation with an understanding that supports justice, development, law, economy, freedom and security as two complementary events. We were in favor of building a system of rules based on justice, freedom, equality and human rights. We will continue to work in that direction next time.

Over the last 18 years, we have made great changes in line with the goal of establishing and maintaining justice. If we turn our backs on the reality of change and do it on our own, we will not be fulfilling our duty to the nation. To do this, we prepared a judicial reform strategy document that we shared last May.

All sports competitions will continue to be played without spectators. Activities on the Astro Fields will be suspended

On weekends, the temperature will be limited from 10.00 to 20.00 so that supply and production chains are not disrupted.

At some point over the age of 65, local guidelines will be extended to those under the age of 20, excluding staff.

Cinemas will be closed until the end of the year, in line with industry demand.

Business hours such as shopping malls, markets, restaurants, barbershops and hairdressers will be limited from 10am to 8pm.