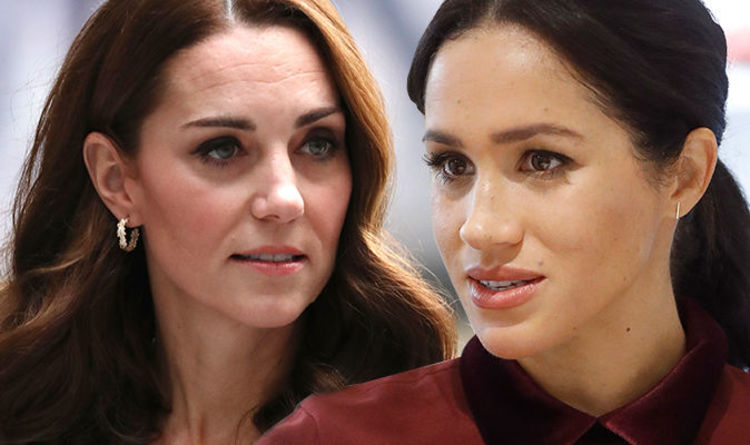 But what's really going on with the Royal sisters-in-law? Is the heightened scrutiny justified? Or is casting the Duchess as rivals unreasonable speculation? Commenting on the supposed tension between the Royal "outlaws", an insider said: "They are very different women despite their similar circumstances. Meghan is an extrovert while Kate is quite shy. "

But rumors abound that emotional strain is running high between Meghan and Kate.

In an explosive development, it has been revealed since the sudden departure of Meghan's personal assistant – known as Melissa – the former suits actress has been "difficult to work for" and "snaps" at Palace staff, although her fans insist she is a " breath of fresh air ".

READ MORE: Why did Meghan Markle NOT stand with Royals on Remembrance Day?

Theories of a rift between Kate and Meghan were brought to the fore by a bombshell claim made by a source who spoke to the Daily Telegraph, citing an "incident" in the build-up to the wedding of Meghan and Harry in May.

The insider said: "Kate had just given birth to Prince Louis and was feeling quite emotional."

According to the Daily Telegraph, there was also noticeable tension between the pair when they appeared at the first Royal Foundation forum in February.

READ MORE: Meghan Markle and Harry to move away from Kate and William

Meghan appeared to hold herself with more gravitas than Kate, who is naturally more reserved, despite the American newcomer being lower down the pecking order.

The apparent assertion of Royal ranking was brought to light during the Remembrance Day commemorations mid-way through this month.

Meghan was entrusted to "look after" Elke Budenbender, the wife of the German president.

And, in another suggestion of family difficulties, when asked if there were disagreements within the Royal Family, William quipped: "Oh, yes".

READ MORE: Is RIFT between Kate and Meghan forcing William and Harry apart?

While Harry added: "Working as a family does have its challenges, of course, it does.

"But we're stuck together for the rest of our lives."

But these comments are unlikely to make Meghan and Kate arch enemies, despite the rumors of "tension" between the Sussex and the Cambridges, amid Prince Harry and Meghan's relocation to Windsor.

The Royal couple are planning to move to Frogmore, a 33-acre estate at Windsor Castle's Home Park, where they will reside in a cottage in the wide grounds.

The move may simply be to allow for extra space when Meghan gives birth to the Sussex's first child, which they are expecting in the spring.

Kensington Palace said: "Windsor is a very special place for their Royal Highnesses and they are grateful that their official residence will be on the estate."