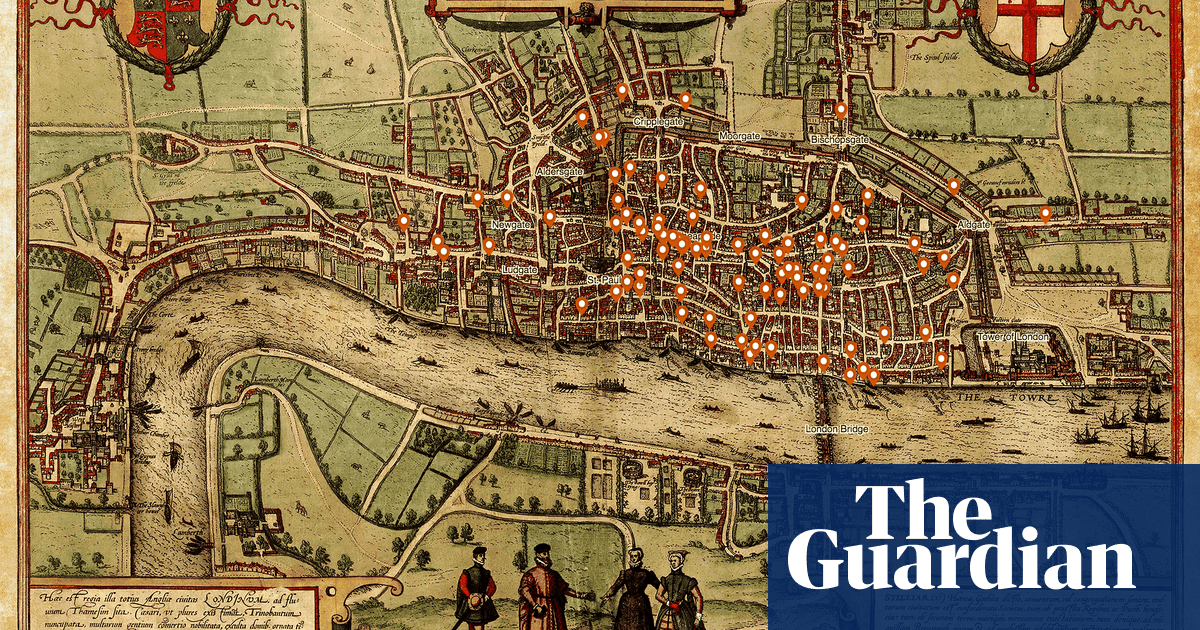 It kicked off at an urinal in Cheapside, and ended in a bloody and brutal murder. Poor aim has been responsible for many unexpected deaths, but perhaps none other than that of Philip of Ashendon.

One of a brutal range of fatal scuffles, revenge killings and infanticides recorded by London coroners in the early 1300s, Philip's demise is among those to feature in a new interactive map that uses death to breathe life into the medieval London.

"Many homicides in contemporary society start out from altercations that are of a very trivial nature," said Prof. Manuel Eisner, an expert in the history of violence who compiled the map. The same, he said, is true of the past.

On December 8, 1321 by hand named William Roe visited the urinal at the top of St Vedast Foster Lane. "He cast the gold into the shoes of an unknown young man, and as the latter complained, William struck him with his fist," records known as the "coroners' rolls" reveal, adding that Roe's poleaxe clattered to the pavement in the failures .

Philip of Ashendon then entered the fray. "[Philip] William scolded, who got angry, picked up the poleaxe and struck Philip over the forehead, inflicting a wound that penetrated to the brain. "

It was far from the only case in the area. The map, bearing details of 142 murders, reveals that anyone venturing into the bustling commercial road of Cheapside would have done well to be on their guard: the stretch was a hotspot of bloodshed.

Among other cases, a brewer stabbed a man who had been hurling insults at him, while a few years later – close to Valentine's Day – a chaplain named Alan de Hacford murdered his rival love Walter de Anne by stabbing him in the stomach with a long narrow knife known as mercy after finding him embracing their shared girlfriend.

"[Cheapside] It was this big street with lots of market stalls, with probably lots of taverns, lots of possibility for conflictive interactions, "said Eisner, adding that the area around Leadenhall market also appeared to be particularly bloody.

The new map is based on coroners' rolls from the time, for which copies covering nine separate years between 1300 and 1340 survive. "Neither before nor afterwards there are records that describe violent events in such detail," said Eisner, adding that the coroners recorded unnatural deaths ranging from suicides to murders and unfortunate accidents.

Analysis of the records show the majority of murders occurred in public areas, while 31% took place on a Sunday.

"It's probably best interpreted as the analog to the concentration of houses on Fridays and Saturdays in the contemporary society," said Eisner. "The days when people were off work were the days when most of these conflicts happened. Also similar to contemporary society, most events happened in the evening hours, "he said, noting a peak in the early evening and around the time of curfew – about 9pm in the summer and about 8pm in the winter.

However, only a fraction of the medieval murderers seemed to have been caught, with many fleeing or seeking sanctuary in churches – from where they often tried to escape under the cover of darkness, as was the case for a young man in Cordwainer, just south of Cheapside, who bashed an adversary of his father with an iron bar.

While history Barbara Hanawalt had previously analyzed many of the records, Eisner said his map helped shed light on how middle ages looked in a big city like London, from the jobs people did, to their arguments.

One striking feature, he said, is that the perpetrators and victims of the violence were not on the margins of society, pointing out that law students, clergy and guild-members were both murderers and dead. The records also show that more than 90% of the offenders were men – and that society was heavily armed.

"Almost every act of homicide was committed with a weapon that was probably designed for conflict or an weapon that could easily be used in a conflict," said Eisner. "Very few cases were done by hands or something else that just happened to be around."

But Eisner said developments in technology and medicine meant that it could be tricky to compare homicide rates with those of modern society. "Clearly many of the victims that we see in these records would have survived if there had been a service emergency around the corner," he said.

"One of the fortunate things for the middle ages was that they did not have any guns. Because I think they would have quickly wiped each other out. "