2019 NFL Mock Draft: Dwayne Haskins is the first quarterback off the board, three QBs go in first six picks 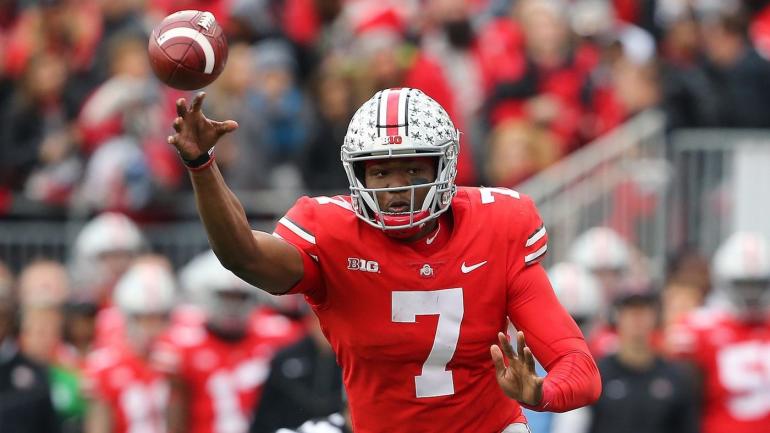 In our latest mock draft we welcome some old names and new faces. This week we see the return of D.K. Metcalf, the Ole Miss big-play receiver who suffered a season-ending neck injury in October. At the time, his NFL future was unclear, but Metcalf announced last week that he's leaving school and declaring for the draft. And assuming he clears all the medical hurdles, he'll probably be the first pass catcher off the board.

Also back: Ohio State quarterback Dwayne Haskins, who has always been mentioned among the best college quarterbacks this year, but who many thought was not in a hurry to leave school. He's a redshirt sophomore but if Haskins does declare, he could leapfrog Justin Herbert as the draft's top passer.

More on the NFL

We also see two new names in the first round, along with three quarterbacks and 21 defensive players

Alright, let's get to all the picks.

If you're wondering, the picks below are ordered based on winning percentage, playoff seedings and strength of schedule (via Tankathon.com).

Sorry to interrupt your reading, but just a quick PSA here. We have a pretty amazing daily NFL podcast you may not be aware of. It's hosted by Will Brinson and it's all the things you're looking for: news, fantasy, picks, really, just football stuff for football people. Subscribe: via iTunes | via Stitcher | via TuneIn | via Google

Nick Bosa, DE, Ohio State. Here's the deal: The 49ers are a bad team. The good news is their season has been ruined by injuries and 2019 will be much improved. The bad news is they lack a consistent pass rush. Drafting Bosa, who has the potential to be a game-changing talent, solves that. (Stream 49ers-Seahawks and the whole Sunday NFL slate on fuboTV, try it for free. You can also stream Ravens-Falcons and all the CBS games on CBS All Access.)

D.K. Metcalf, WR, Ole Miss. Metcalf probably will not go this high, partly because he suffered a neck injury in October that ended his college season. But, hey, it's late November and there are so many times we can mock Jonah Williams to Arizona. Metcalf, who declared for the draft last week, was one of college football's most dynamic pass catchers before he was hurt. We'll find out how healthy he is in the coming weeks and months but he gives Josh Rosen and the Cardinals offense to a much-needed downfield threat.

Dwayne Haskins, QB, Ohio State. Haskins, like Metcalf, resurfaces in our mock draft. We have not included him in weeks, mostly because it sounded like the redshirt sophomore was set to return to school. But he's put up gaudy passing numbers this season, including his five-touchdown performance against Michigan over the weekend. Haskins could have the most upside of any quarterback in this class, and his 4,000 passing yards and 68.9 completion percentages only make him more attractive to quarterback-needy NFL teams.

Quinnen Williams, DL, Alabama. The Jets arguably have bigger needs for an edge rusher, wideout or offensive linemen, but Williams is too good to pass up here. Henry Anderson was acquired via trade in the offseason but Williams has another talented world.

Drew Lock, QB, Missouri. Lock is a strong-armed quarterback whose game sometimes reminds us of Jay Cutler – both the good and the bad. He can make every throw (and make every throw look easy), but sometimes struggles with decision making, just like every other young passer. And young is the operative word; Eli Manning may be playing better in recent weeks but his lack of arm strength can be glaring at times, and there's no reason for the Giants to bring him back in 2019 when this team looks like it's just a few players turning things around.

Justin Herbert, QB, Oregon. And the run on quarterbacks continues. The Jaguars are moving on from Blake Bortles; They announced Monday that he's been benched, and that news came shortly after the team fired their offensive coordinator. Yes, they just signed Bortles to a three-year, $ 54 million extension last offseason but he's gotten worse since 2017. Jacksonville's window is already closing and it needs to move to Plan B, whether that's drafting the next quarterback franchise or finding one in free agency this spring.

Ed Oliver, DT, Houston. The Falcons' defensive line is among the league's worst against the run and the pass and Oliver is arguably the second-best defense player in this draft after Bosa. (Worth noting: Oliver, who missed four games with a knee injury, played just one half against Memphis before sitting out the final 30 minutes after aggravating the injury.)

Rashan Gary, DL, Michigan. The Lions have defensive tackle needs and on the edge and Gary can do both. He's probably better suited to play inside, and he's yet to scratch the surface on his abilities. Lions coach Matt Patricia, who was previously the Patriots defensive coordinator, could be able to exploit Gary's talents in Detroit.

Greedy Williams, CB, LSU. The Bills' defense is already among the best leagues but imagine the Williams match with Tre'Davious White, the 2017 first-round pick. Williams is long, lean, fast and physical and would fit right into what Sean McDermott does in Buffalo.

Jachai Polite, EDGE, Florida. The Buccaneers' defense is a mess. Polite, who had a breakout season in Florida, would provide the quickest path to fixing this unit. His ability to get in the backfield was unrivaled at times this fall. Vinny Curry has not worked out in Tampa Bay but Jason Pierre-Paul has 10.5 sacks. Polite and JPP on the field at the same time would be something to behold.

Deionte Thompson, S, Alabama. The Packers traded away Ha Ha Clinton-Dix and currently, 35-year-old cornerback Tramon Williams is playing free safety. Thompson's the best safety in this class and it is not close. With depth at pass rusher, Green Bay gets their centerfielder here.

Jonah Williams, OT, Alabama. With future Hall of Famer Joe Thomas now in retirement, Williams would anchor the Browns' offensive line. Rookie quarterback Baker Mayfield is playing like a grizzled vet and keeping him upright will be key to Cleveland's return to relevancy in 2019.

Josh Allen, EDGE, Kentucky. Cameron Wake is 36 years old and Robert Quinn and Adrian Branch have combined for 3.5 sacks. Allen, who has had a senior season breakout, has been a tenacious pass rusher who can also drop into coverage.

Amani Oruwariye, CB, Penn State. Oruwariye is a rangy, physical corner with playmaking ability. Tramaine Brock, who signed a one-year deal in the offseason, has not lived up to expectations. And Bradley Roby, who is not playing as well as he did in 2017, is in the final year of his rookie contract. Oruwariye and Chris Harris Jr. could solidify the secondary, making Von Miller and Bradley Chubb's job easier.

Yodny Cajuste, OT, West Virginia. After dominating for much of last season, the Eagles' offensive line could use an upgrade. The unit ranks 19th in run blocking and 24th in pass protection. Jason Peters is 36 years old and his contract is set to expire after the 2019 season.

Mack Wilson, LB, Alabama. The Bengals' defense has been dreadful this season and solidifying the middle of the unit is as good as any place to start the rebuilding process. Wilson is a smart, savvy, sideline-to-sideline talent who could immediately step into a starting role.

Deandre Baker, CB, Georgia. Malcolm Butler has been a huge disappointment. And while Baker may be considered too short by some teams (he's 5'11) to compete against bigger NFL receivers, Adoree Jackson (also 5-11) was the 18th overall pick in the 2017 draft – and Baker is already a more polished corner.

Brian Burns, EDGE, Florida State. Bruce Irvin, the team's former first-round pick, is similarly lithe but do not let Burns' long frame fool you. He can set the edge and use his strength to overpower offensive linemen. He's also one of the best pass rushers in the draft, and would complement Frank Clark and his 10 sacks nicely.

Chris Lindstrom, G, Boston College. Greg Van Roten has struggled this season and Lindstrom is a mauler who would be an upgrade both to run and pass blocker.

Byron Murphy, CB, Washington. This is not Washington's biggest need but Murphy has the chance to be special. Josh Norman is 30 years old and the Redskins could use some depth alongside Fabian Moreau and rookie Danny Johnson.

Montez Sweat, DE, Mississippi State. The Raiders got their quarterback with the first of their three first-rounders and now they address their pass rush after trading Khalil Mack and releasing Bruce Irvin.

Clelin Ferrell, DE, Clemson. Terrell Suggs is 36 and this may be his last season in Baltimore. Ferrell is not as explosive as Suggs in his prime but he can certainly grow into that role while playing on one of the league's top units.

Devin White, LB, LSU. Same as last week. Mack Wilson may be the more polished linebacker but White is arguably more explosive. Both have sideline-to-sideline speed and the athleticism to handle the demands of the position in today's NFL but White may be more of a thumper.

N'Keal Harry, WR, Arizona State. We're going to take a break from mocking an offensive lineman to the Vikings here and give Kirk Cousins ​​a shiny new downfield threat. Laquon Treadwell has yet to play like a first-round pick and Harry is a monster who makes catches look easy and has shown the ability to score from anywhere on the field.

Michael Jackson, CB, Miami. Kevin Johnson has battled injuries in his four NFL seasons and Shareece Wright and Johnathan Joseph both are on the wrong side of 30. Jackson is a smart, physical corner who would be fit in Houston.

J.J. Arcega-Whiteside, WR, Stanford. The Raiders have their new franchise quarterback and a pass rusher. And with their final pick in the first round, they grab a big-play wide receiver. Both Arcega-Whiteside's parents were professional basketball players and it shows in their game. He has routinely high-points the ball and has been known to box out defensive backs on end-zone passing plays. We're guessing Jon Gruden would find plenty of ways to use him in Oakland.

Jeffery Simmons, DT, Mississippi State. Hard to imagine Simmons lasts this long but if he does the Chargers will sprint to the podium to take him. Imagine the defensive line with Joey Bosa, Melvin Ingram and Simmons.

Dexter Lawrence, DT, Clemson. The game has evolved since the Patriots took Vince Wilfork with the 21st pick back in 2004. And in one sense, Lawrence is a throwback to that time; At 340 pounds, he is not easily moved off the spot. But do not be fooled by his size, he's also incredibly quick, which makes him virtually unblockable one-on-one. I would bolster a defensive line that ranks 22nd against the run and 30th against the pass.

Bryce Hall, CB, Virginia. A big physical cornerback who is a sure tackler, Hall looks like a perfect fit in Wade Phillips' scheme – and he would offer much-needed depth should Aqib Talib or Marcus Peters not return in 2019.

Gerald Willis, DT, Miami. Willis' quickness makes it difficult for offensive linemen to block him to the point that he regularly requires double-teams. And given the Chiefs' issues on the defensive side of the ball, the U star would provide a much-needed playmaker.

David Edwards, OT, Wisconsin. Right guard Byron Bell is on a one-year deal and he's struggled with consistency this season. Edwards dominated at times at right tackle but he could move inside in the NFL.