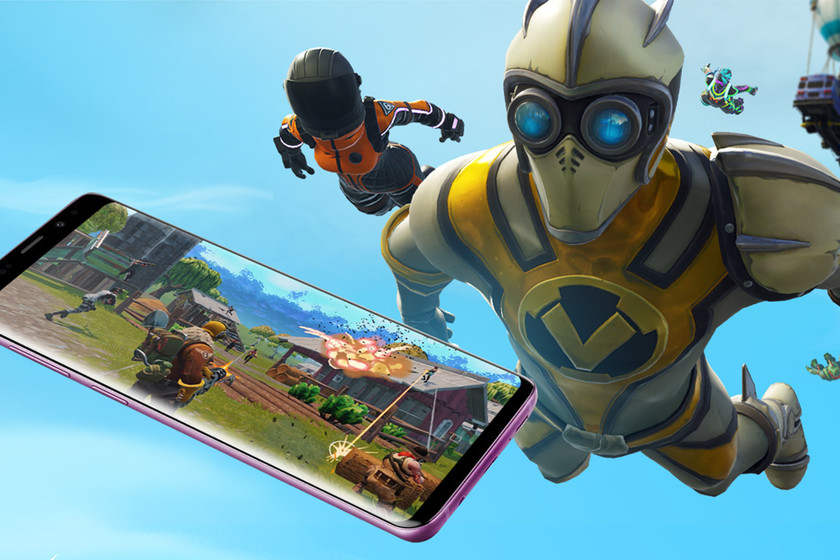 Fortnite It's the fashion game. In fact, Fortnite has had more concurrent players than all Steam games combined, which has allowed Epic Games to have expectations of closing 2018 with revenues of $ 2 billion. It may be that such a success is that it is free, that there are thousands and thousands of streamers playing in Twitch and that can be accessed from any platform.

But we talk about mobiles, so we're going to talk about mobiles. Fortnite is available for iOS and Android, but that does not mean that it can be played on all devices. The game of Epic Games is quite heavy, it is loaded with animations and requires of some more or less powerful components to be able to work, so it is not worth any mobile. That is why we make this list, to facilitate the task of finding a terminal from which to play.

But before, let's look at Fortnite's requirements

As we said before, Fortnite has a series of minimum requirements That your mobile must meet if you want it to work. According to Epic Games, an Android device must have:

This, in other words, means that one mobile compatible with Fortnite must have at least:

Fortnite requirements will not go down. The CEO of the company already said at the time, arguing that "Fortnite is the same game on all platforms and you can play with friends in all of them. That means we can not do any game change optimization for Android devices low range, as does PUBG Mobile ". Another important point is that Fortnite is not compatible with rooted mobile phones.

The iPhone XR is one of the latest devices in the apple company. Its 3 GB of RAM and the Apple A12 processor are more than enough to move Fortnite without any problems. The main catch you could put is the resolution of your screen, which is little more than HD, but Apple has done a very good job with it. It is a highly recommended device and its price is 919 euros on Amazon.

If you do not want to spend 919 euros on the iPhone XR and prefer a cheaper iPhone, the iPhone 8 Plus is a good option. It has no notch, its screen is FullHD and Fortnite moves with total freedom. The 64GB version in silver is 799 euros in PCComponents.

Leaving the iPhone aside, we went to the Korean firm par excellence: Samsung. While Note 9 and S9 + are compatible with Fortnite, the normal Galaxy S9 offers more than good performance and its price is lower. It has a 2K + screen, 4GB of RAM, the latest Samsung processor and a Amazon price of 535 euros.

Do you prefer something more economical? Well the Samsung Galaxy S8 can be worth you too. It is a device that assembles a 2K screen without side edges, four GB of RAM and the Exynos 8895 processor. It is not the last stop of the Korean firm's range but continues to perform well, which is why it is a recommended purchase, especially for 425 euros on Amazon.

We leave Samsung and go to Huawei. Its latest high-end, the Huawei Mate 2 Pro, in addition to having three cameras powered by AI, has between six and eight GB of RAM, the Kirin 980 processor and a range in which it stands out greatly. It is more expensive, since it is more recent, but it is a safe bet. You are on Amazon for 958.20 euros.

If the Pro model is too expensive or budget is out, the Mate 20 offers a very similar specifications at a more eaten price. It has a 6.53-inch screen, 4 GB of RAM, Kirin 980 and 128 GB of storage. A very capable terminal that has little to envy the Pro and can take you home for 749 euros.

Although the main claim of the Huawei P20 Pro is its camera, the top of the P family range does not fall short in performance. It has the Kirin 970 processor, 4 GB of RAM, 6.1-inch screen and 128 GB of internal memory. All this for 630.98 euros on Amazon.

If we continue to lower the price we have to look, of course, to the little brother through the P range, the Huawei P20. It has no triple camera but it does have 4 GB of RAM, the same processor as the P20 Pro, a 5.8-inch screen and also 128 GB of internal storage. It's Amazon at a really interesting price: 470 euros.

We still talk about Huawei, but this time we go to his sub-brand Honor. This firm has the peculiarity of offering high-end devices at lower prices, and its last star is the Honor 10. Its screen is 5.84 inches, it has 4 GB of RAM and 64 GB of internal storage, Kirin processor 970 and a demolition price: 338 euros. A very recommendable purchase.

We can not let pass the Honor Play, which is the mobile gaming of Huawei. We have already said in its review that it is an ideal terminal to play PUBG Mobile (or Fortnite, in this case), but also for everything else, and not for nothing. Its technical data sheet is made up of 4 GB of RAM, 64 GB of storage, a double camera and the Kirin 970 processor. Price? 329 euros on Amazon.

We end up with Huawei but we are still staying in China, because it's about talking about Xiaomi. Its latest flagship is the Xiaomi Mi 8, a device with the latest Qualcomm processor, the Snapdragon 845, 6 GB RAM, 6.22 inch screen and 64GB of storage. Its price is 459 euros on Amazon, and it is one of the most economical high-end terminals you can find.

And if we talk about high-end we can not stop talking about the Mi MIX 3, the latest release of the Chinese firm that bets on the screen slider. As for what interests us right now, what are the specifications, the Mi MIX 3 has 6GB of RAM, 6.39-inch screen, 128GB of storage and the Snapdragon 845 processor. Gearbest is at 507.01 euros .

If the Mi MIX 3 looks too expensive, the Mi MIX 2S is a good option to replace it. It is the previous model but it has a huge screen with no frames of 5.99 inches, 6 GB of RAM, Snapdragon processor 845 and 64 GB of storage. It is a terminal that renders to perfection and assembles the latest in components that you can take home for 380 euros on Amazon.

The POCOPHONE F1 is one of the most recent Xiaomi mobile phones. It is a high-end terminal (in terms of specifications) but at a reduced price. It lacks NFC but it compensates it with 6 GB of RAM, 64 GB of storage, Snapdragon processor 845 and a 6.18 inch panel. 323 euros on Amazon is its price.

We ended up with Xiaomi talking about his gaming device, the Xiaomi Black Shark. Although the specifications are very similar to those of previous models (6 GB of RAM, Snapdragon processor 845, 64 GB of storage and 5.99 inch screen), its main difference lies in liquid cooling, sound and compatibility with the Joypad (an accessory with physical buttons). It costs 376.80 euros in AliExpress, 405 if you add the accessory.

We reached the end with the OnePlus 6T. It is a high end terminal that assembles the components that one would expect. Thus, the new range of OnePlus includes 8GB of RAM, Snapdragon 845 processor, 128GB of internal storage and a notch screen in the form of a 6.41-inch water drop. Its price in Amazon is 579.90 euros.

Note: some of the links here are affiliates. In spite of that, none of the mentioned articles have been proposed either by brands or by stores, with its introduction being a unique decision by the editors team.