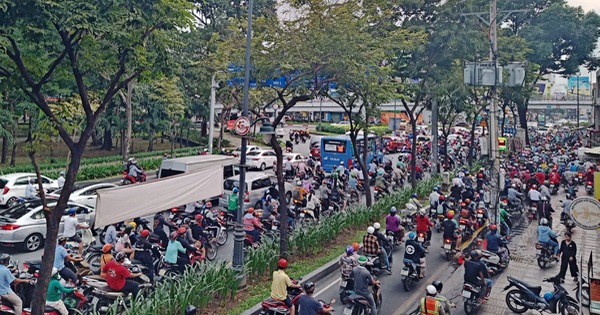 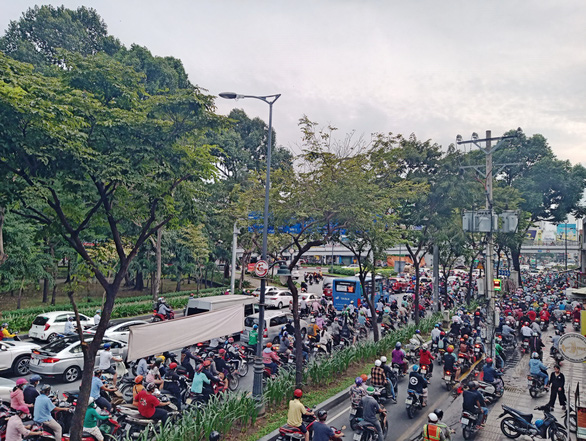 One of the reasons for the slow completion of the works is still the story of land compensation, including land associated with defensive lands.

After the City Public Committee approved the implementation of the Ho Chi Minh City traffic jam repair program, which allows for the start of various works by urgent order, the city’s Department of Transportation has immediately implemented 6 projects. To build traffic works around Tan Son Nhat airport.

In 2017-2018, several projects of the said program were carried out and used, such as the construction of the Truong Son Passage in front of the gate of Tan Son Nhat Airport, a project to build the passage on Nguyen Kiem Street. – Nguyen Thai Son and Hoang Minh Giam road widening project. These projects have led to initial efficiency in improving the order of traffic in the area in front of the airport.

However, traffic overload remains near Tan Son Nhat airport. Especially when there is a policy to build T3 terminals to increase passenger transfer capacity from Tan Son Nhat Airport.

In addition, the city’s transportation industry is also considering projects to expand the Tan Ky – Tan Quy roads (stretch from Le Trong Tan to Cong Hoa) and the project to widen the Truong Chinh road from Cong Hon to Co Co to solve the problem. repair the congestion at the north gate of Tan Son Nhat Airport. However, almost all of these projects have been under lockdown for many years.

Urban Traffic Management Zone No. 1 (now the Board of Directors of investment projects for the construction of traffic works in Ho Chi Minh City) said the project to widen Cong Hoa Street (from the military barracks gate – next to the airport to Cong Hoa) 783m long, 8-10m- the width of one was extended to 22m, he signed a contract with the construction contractor, waiting for the delivery of the land to start construction.

The area of ​​cleared land is 4,200m2, of which the military land managed by section 367 is 3,361m2. Area 1 of Urban Traffic Management has requested the City Public Committee to consult with the Ministry of Defense to allocate land in advance for the implementation of the Air Force and 367 Divisions project. However, so far this project has not taken the time to alleviate itself.

Also, the Cong Hoa road renovation project (part of the Lang Cha Ca junction – from Tran Quoc Hoan street 2 to Thang Long road) is only 134 meters long but has also been delayed due to land problems.

This project has been approved by the City Council’s Department of Transport for investment in 2017, ranging from 14.1m on a large scale, adjusted to 19m and with a total investment of VND 141.8 billion. Of these, the compensation compensation is VND 113 billion for the 17 affected cases of the project.

Although funds to compensate for the site’s permit are available and a contractor has been selected, the project has not yet been built, as there are still many cases where they have not agreed to receive compensation and permission. Therefore, the road leading from the Lang Cha Ca junction is still “congested” and causing large queues of cars.

There are two projects to fix traffic jams north of Tan Son Nhat Airport, namely the project to widen Tan Ky Tan Quy and widen the Truong Chinh road since 2018.

In this, the project to widen the Tan Ky Tan Quy road is 644.5 m long, 30 m wide, has 6 lanes. The project to widen Truong Chinh Street is 904 meters long, 60 meters wide, to reach 10-12 lanes for traffic. According to the investor, these projects are being delayed due to problems cleaning the site.

However, according to the information the reporter knew, so far, the sites have not yet determined the exact time to provide the exact site.

The road project linking Tran Quoc Hoan – Cong Hoa (Tan Binh district) is considered the second gateway to Tan Son Nhat Airport, the work was decided to be invested in the 2016 City Council. But in late August 2018, the Ministry of Transport signed a decision approving the adaptation of Tan Son Nhat Airport until 2030, and decided to build more T3 terminals. Since then, the above project has been adapted in five parts with a 6-lane scale, 29.5 – 48m wide.

The project is 4.4 km long with a total investment of more than VND 4.8 billion, of which construction cost is more than VND 1.735 billion and compensation, support and relocation are more than VND 2.64 billion. The project implementation period is 2024. This project involves a part of the land managed by the national defense in the cleaning of the sites.

In late October 2020, the Ho Chi Minh City Public Committee made a request to the Ministry of Defense to agree on a project for the construction of a new road linking Tran Quoc Hoan and Cong Hoa Street, which will soon open the second gate to the airport. Tan Son Nhat.

Earlier, in May 2020, the City Public Committee also made an urgent submission of the same content, but received no response. The City Public Committee asked the Ministry of Defense to hand over 1,122 square meters of land so that the city can organize convenient and safe traffic, as well as 33 homes capable of allowing relocation, most of which are soldiers of subordinate units. Department of Defense.