The town of Ho Chi Minh is changed after Usagi storm 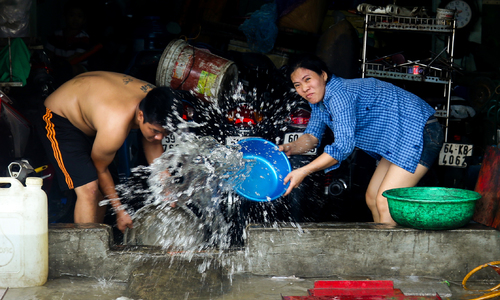 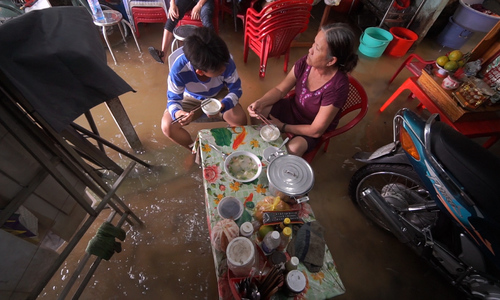 Saigon fought with the flood after the storm

After flooding Saigon after the storm.

On the afternoon of November 26, on many roads in HCM City, 2, 7, Binh Tan … regions are seriously invading. Life is getting weaker, people are looking for ways to go back to normal activities. It is the result of rain, which lasts all day and night.

At No. 32, Road 60 (Thao Dien Ward, 2nd District), water walked on motorcycles, many people had to leave home and wait for water.

"In the end, the water rises to the middle of the refrigerator, my family used to tighten the brick queue to prevent damage," said Le Thi Kim, a worker, said he had dropped water in the afternoon.

Mrs. Nguyen Thi Ngan's house is clear. "I rent this house for more than 2 months, when the sea is high, the water level is just outside the door, I think the rain on the road is a storm repair, unfortunately.

"My house has raised the floor and the water is still being moved to the living room, and the refrigerator, TV and furniture went through the night," said Kha Lyrek, to avoid getting wet in the refrigerator.

The water is poured into the bed, Mr. Dinh's family's toilet. The family had to hang around the night, as they were sleeping in the corner.

In Phan Huy Ich street (Tan Binh district), more than a meter of water passed after a permanent rainfall. At noon, a lot of dwelling on the road is covered with water and water.

In the afternoon, many houses face Huynh Tan Phat Street (District 7). On the road, on the 602 road, the water level is close to the knee and people are hard pressed. "From the day of repairing the road, this is the first time the floods on the street," Tuyen said, people in the alley, urgently.

"The downfall, the houses were flooded all night long". I can not do anything all day, I have to throw it in with the water intake, "said Le Huu Thanh, the auto repair shop owner, Huynh Tan Phat.

"The rain did not overnight tonight, this morning, the owner of this furniture store pumps the water that gives 300,000 VND water pumps," said Sang, who rented the pump.

Store workers sell building materials to clean it up.

A store that puts a water pump out onto the street. The owner said that rising water has affected motorcycles.

"The road was flooding, I separated my mother and motorcycle separately, I had to sink to bring the husband of Long Hoa Pagoda," said Le Thanh Thuy, 52, with Huynh Tan Phat with his husband, about 2 km of incense.

After 4 days after the South China Sea, at noon, November 25, when the storm caused the heavy precipitation of the southern provinces of Usagi,

The precipitation is measured in 293-407 mm in Ho Chi Minh City. Ho Chi Minh is the fastest time and flow of the city until now, and historical precipitation has been exceeded 26/26/2016 (200 mm). However, the 2016 rainfall occurs in a few hours and concentrates in some areas, during the rain and during the district.